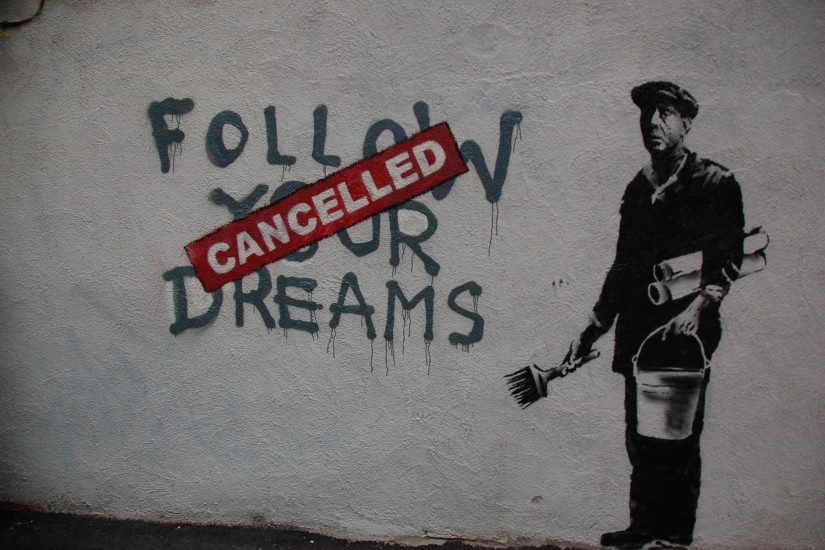 A piece by street artist Banksy in Boston with the phrase "Follow your Dreams" crossed out by the word "Cancelled" (2010).
flickr.com/cdevers
…

If the idea of shifting policy to generate greater happiness seems improbable—or even a bit sinister, in a social-engineering sort of way, think back to the days of Americanitis. More than a century ago, the country was coming out of the Gilded Age, a period that, for good reason, frequently gets compared to our own—the wealthiest of robber barons were accumulating more wealth at a rapid pace; the gulf between rich and poor was expanding. From the standpoint of typical economic metrics, things were going swimmingly, with GDP and wages both rising fast, but unrest in much of the country—and the number of neurasthenia diagnoses—suggests that wellbeing didn’t follow along. In the South, Reconstruction plans were abandoned, leaving black people vulnerable to white terrorism. In New York, the Times reported that bombings were occurring monthly—the work of disaffected radicals seeking to disrupt capitalist power. In 1901, Leon Czolgosz, an anarchist and former steel worker, assassinated President William McKinley.

The Progressive movement was created out of those conditions. In drafting policies, Progressives sought prosperity that could be shared in an equitable fashion—something that we now know is key to societal wellbeing. They fought child labor and industrial monopolies, created minimum wage laws, and passed the 16th Amendment, allowing the federal government to collect income taxes. “The national parks were pretty much created to give neurasthenics places to retreat into nature and heal,” Beck writes. Americans also got playgrounds and other community spaces that helped children flourish.

The Progressive goal of using government in the service of personal and societal wellbeing is exemplified in the work of John Dewey, the influential education reformer. In a laboratory school he created at the University of Chicago, Dewey encouraged students to work cooperatively and to see their classrooms as tiny civic societies. At a time when classwork consisted largely of copying down lessons, Dewey aspired to teach children democratic values—by singing together, collectively studying how wool becomes fabric, and cooking in a “busy kitchen” filled with “buoyant outgoing energy.” In The School and Society (1900), Dewey defines a society as “a number of people held together because they are working along common lines, in a common spirit, and with reference to common aims.” He goes on, “The radical reason that the present school cannot organize itself as a natural social unit is because just this element of common and productive activity is absent.”