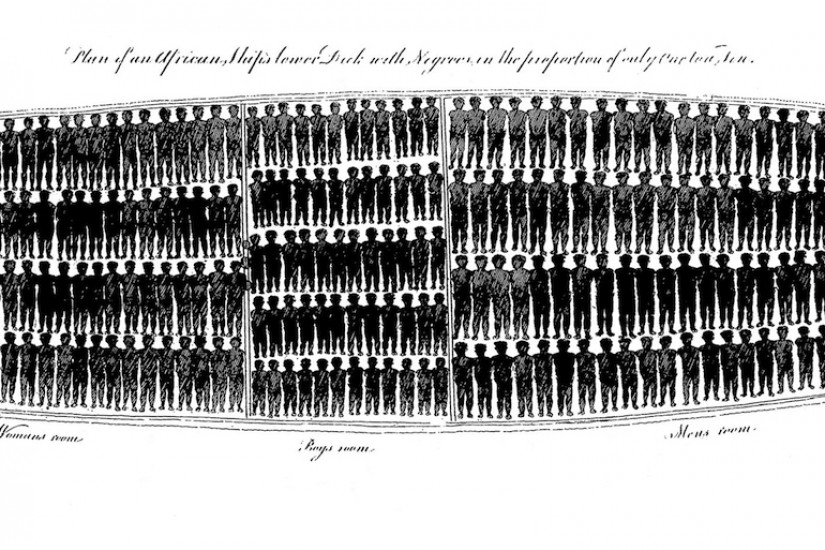 "Plan of an African Ship’s Lower Deck with Negroes in the Proportion of Only One to One Ton," by Sir William Elford, c. 1789. Library of the Society of Friends.

The first abolitionist engraving of a slave ship, titled Plan of an African Ship’s Lower Deck with Negroes in the Proportion of Only One to a Ton (1788), was conceived by the Plymouth Committee of the Society for Effecting the Abolition of the Slave Trade in England. Viewed from above this schematic plan shows a cargo hold packed with hundreds of enslaved Africans—represented by tiny, uniform, darkly shaded figures—and so hints at the barbarity they were made to suffer during the Middle Passage, the transatlantic voyage from Africa to the New World slave markets. Among the first to publicly acknowledge the visual impact of this image, printed on paper 6¾ by 16 inches, was African-born Olaudah Equiano, whose letter to the Plymouth Committee appeared in a London newspaper, the Public Advertiser, on February 14, 1789. In his own carefully chosen words, Equiano professed:

Having seen a plate representing the form in which Negroes are stowed on board the Guinea ships, which you are pleased to send to the Rev. Mr. Clarkson, a worthy friend of mine, I was filled with love and gratitude towards you for your humane interference on behalf of my oppressed countrymen.

An ex-slave and free man of color living in London, Equiano was an outspoken opponent of the slave trade, who regularly described his personal experience of slavery at public gatherings. His public performances had gained Equiano such a reputation that by the time his letter appeared in the Public Advertiser, he was on the verge of publishing his enormously successful autobiography, The Interesting Narrative of the Life of Olaudah Equiano or Gustavus Vassa, The African, in March 1789.

It is not hard to imagine why Equiano immediately recognized the print’s capacity to serve the goals of abolition. For him, it provided a shocking visual reminder of a place and an experience that he himself had known. Yet still it must have been difficult for him to conceive of how anyone could render such an image. Indeed, one wonders just exactly what he felt, what he remembered when Thomas Clarkson showed him the oblong engraving of the plan of the slave ship.