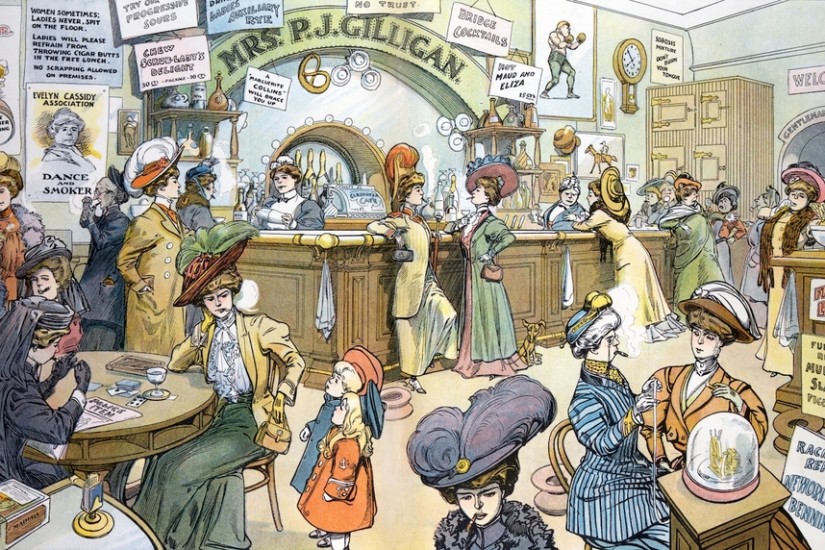 Illustrator Harry Grant Dart's “Why Not Go the Limit?” published in Puck magazine on March 18, 1908.
Library of Congress

Last year, a cartoon by illustrator Harry Grant Dart that appeared in the centerfold of the March 18th, 1908 issue of the political satire magazine Puck went viral.

It’s a scene set in a fictional New York bar called Cleopatra’s Cafe, Mrs. P.J. Gilligan proprietrix, which is populated entirely by women. Captioned “Why Not Go the Limit?,” it’s meant to be a gasp-worthy image of a hellish future in which widows play cards over the police blotter, mothers neglect their children and women assiduously follow news transmitted over a ticker that is not a stock ticker, by the way, but a sporting ticker reporting the results of horse races and boxing matches on which these degenerates have doubtless placed bets. It strikes a different note to many a modern viewer, however. Its charming cocktails (I’ll have a Hot Maud and Eliza, thank you), fashionably dressed, liberated Edwardian ladies and its free lunch banquet of almonds and fudge make it look like a pretty great place to hang out.

Most of the explanations of this image as it flew around the web saw it as an anti-suffrage piece, a vision of what could happen should the movement advocating for votes for women succeed. Benjamin Breen’s piece here on The Appendix, for instance, describes Dart’s illustration as “a parodic, misogynistic one that imagined a world where women could vote and, consequently, had taken the traditional place of men as drinking, smoking, gambling barflies.” The fact that every single woman in the scene is smoking comes up in an image caption as an ancillary issue, the result of an appalled fascination Dart harbored for women using tobacco products.

That’s actually the reverse of what is really going on at Cleopatra’s Cafe. Dart’s entire point was to lampoon women smoking in public, an issue that had exploded in the public conversation and was happening as he took pencil to paper, unlike women’s suffrage which was still a dozen years in the future. The subheading under the caption is “For the benefit of those ladies who ask the right to smoke in public.” That isn’t code for a wider campaign of women’s rights, like women demanding the right to smoke in public along with the right to vote.