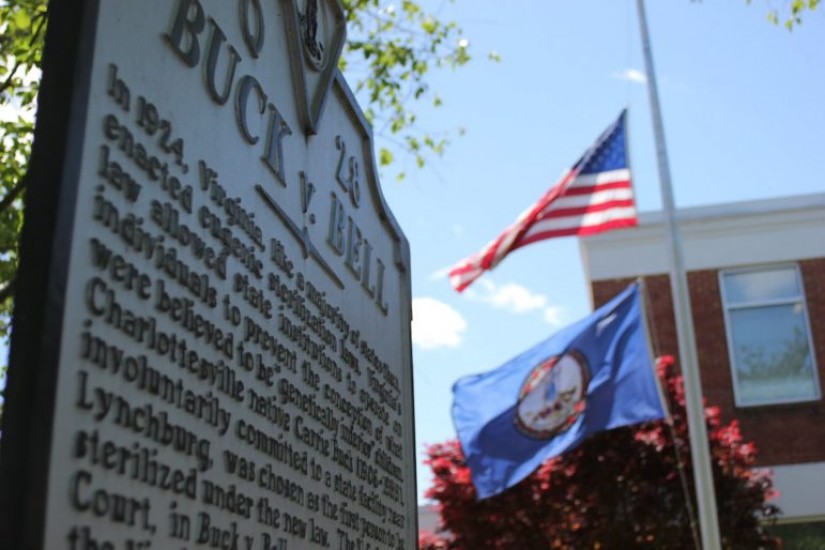 A state historical marker in Charlottesville commemorating the Supreme Court's Buck v. Bell decision. Carrie Buck was born in Charlottesville and is buried half a mile from where Heather Heyer was murdered.
Frederick Coye Heard/Scalawag
…

On July 21, 1939, Virginia’s elite gathered in Staunton to thank DeJarnette, one of the Commonwealth’s most effective eugenicists, for his fifty years of service at Western State Hospital. During the celebration, DeJarnette boasted that he was one of Virginia’s three “greatest advocates for sterilization of the unfit.” A state Supreme Court justice added that DeJarnette had “given in this last half century more valuable service to this commonwealth than has any other man in it.”
Seven weeks later, Adolf Hitler, who took Virginia’s program as a model for German eugenics, invaded Poland. The Second World War – with the revelation of Nazi atrocities intended to create an Aryan “master race” – signaled the end of popular eugenics in the United States. However, Virginia’s eugenics programs would continue quietly for another three decades. The Supreme Court eventually struck down the Racial Integrity Act – and all anti-miscegenation laws – in 1967’s Loving v. Virginia, but the Commonwealth employed the Eugenical Sterilization Act until 1979.

While compulsory sterilizations continued late into the 20th century, they had become a deeply repressed policy by 1980, when a new superintendent at the Lynchburg Training School (previously the Colony for Epileptics and the Feebleminded), told reporters at the Winchester Evening Star about the extent of Virginia’s eugenics programs. The revelation became national news and triggered Poe v. Lynchburg, a lawsuit seeking compensation for the state’s victims. Rather than taking responsibility for the damage done to Virginians by the attempted engineering of white breeding stock, the Commonwealth fought the suit for five years before agreeing to run ads over a three-week period, alerting potential victims that state hospitals had performed compulsory sterilizations for over half a century. Victims would not be offered compensation for another thirty years.

Sixteen years after the Commonwealth was forced to acknowledge its extended experiment in racist eugenics, Virginia began the twenty-first century with two official apologies for eugenics, both of which admit the harm caused by state policies. Nonetheless, the apologies both frame official eugenics programs as aberrations in the state’s history, a departure from our enduring, enlightened values. Moreover, they imply that this unfortunate aberration is now corrected, and can be avoided in the future, if we only remember our past folly. None of that is true.