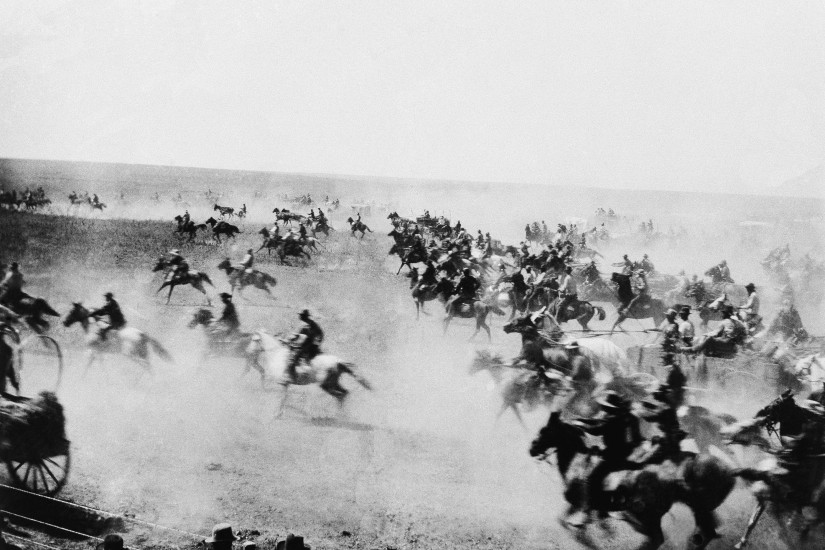 Settlers race across the border into Indian Territory as a signal opens the area to white settlement in Oklahoma City on April 22, 1889.
Associated Press

For many decades, the area we know today as the state of Oklahoma — the pot-shaped chunk of map between Texas and Kansas — was something else entirely. It was called, simply, “Indian Territory.” As American citizens took over every last pocket of the continent, the U.S. federal government had forced indigenous peoples out of their ancestral homes and into this empty patch of the Great Plains. Oklahoma was the endpoint of all the many Trails of Tears. The Choctaw, the Cherokee, the Chickasaw, and dozens of others — sea people, swamp people, forest dwellers, nomads — moved out into the sprawling grasslands. The area was, officially, off-limits to white settlers. It was promised to the tribes as long as, to quote the famous treaty, “grass shall grow and water run.”

The betrayal of that promise did not take long. It began right at the center of Indian Territory, when two tribes, for complex reasons, sided with the South during the Civil War. As punishment, the U.S. government seized their land and gave it to nobody. The area — about 2 million acres, or roughly 5 percent of the state of Oklahoma as we now know it — came to be called the Unassigned Lands. It was a vacuum, nearly half the size of Connecticut, right near the center of America.

Residents of the neighboring states — Arkansas, Missouri, Kansas, Texas, Colorado — noticed that emptiness. They became obsessed with it. They lusted after it. They gave it a name: Oklahoma, Choctaw for “red people.” Some managed to convince themselves that Oklahoma was their destiny, that they were somehow entitled to it. They pressured Congress and propagandized in newspapers.

The surrounding tribes, of course, vehemently objected. The Civil War had blown a hole in the center of Indian Territory, but the rest of it was still allegedly guaranteed forever. Allowing white settlers to pour into the Unassigned Lands would threaten the integrity of everything that surrounded it. Who could say what chaos might follow? Congress deliberated. White settlers lobbied.

Finally, predictably, the settlers got their way.

Congress agreed to open Oklahoma — the Unassigned Lands at the center of Indian Territory — for settlement. There was no orderly procedure for doing so, no process. The authorities would simply fling the land open and let everyone go at it. The rules were minimal and extremely hard to enforce. You could claim 160 acres out in the country or a small lot on a townsite. All you had to do was get yourself there, hammer in your stakes, and fight off competitors. Oklahoma would be, more or less, a free-for-all.