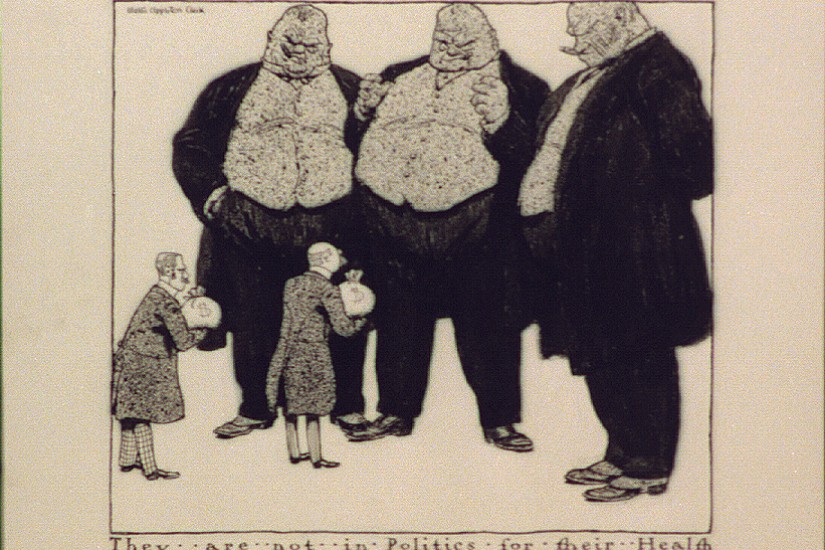 "They are not in politics for their health." Illustration by Walter Appleton Clark, published in Collier's Weekly, 1906.
Library of Congress
…

As Teachout makes clear, the framers themselves predicted that corruption would be a constant threat. George Mason, for example, warned that “if we do not provide against corruption, our government will soon be at an end.” It was a preoccupation of the founding debates. In James Madison’s notebook from the summer of 1787, “corruption” appears fifty-four times. As Teachout puts it, “corruption, influence, and bribery were discussed more often in the convention than factions, violence, or instability.”

By corruption, the founding era did not mean simply the explicit exchange of cash for a vote, what the Supreme Court in its campaign finance decisions has come to call “quid pro quo corruption.” Teachout notes that the word “corruption” came up hundreds of times in the Constitutional Convention and the ratification debates, yet “only a handful of uses referred to what we might now think of as quid pro quo bribes,” constituting “less than one-half of 1 percent of the times corruption was raised.”

In the framers’ view, corruption in the broader sense of using public office for private ends was essentially the opposite of public virtue, and was therefore a central threat to the life and health of the republic. A republican form of government required that men act as citizens, concerned for the public good, and not merely as private, self-interested individuals. The Enlightenment philosopher Baron de Montesquieu, perhaps the greatest intellectual influence on the framing generation, maintained that

the misfortune of a republic…happens when the people are gained by bribery and corruption: in this case they grow indifferent to public affairs, and avarice becomes their predominant passion.

For James Madison, without civic virtue, “no theoretical checks, no form of government, can render us secure. To suppose that any form of government will secure liberty or happiness without any virtue in the people is a chimerical idea.”

In short, the framers saw the avoidance of corruption as an essential organizing principle of our representative democracy. They also understood that rooting out corruption on a case-by-case basis is extraordinarily difficult, so they sought to counteract it through structural provisions that were designed to encourage public virtue and reduce the temptation to privilege private interests over the public good.