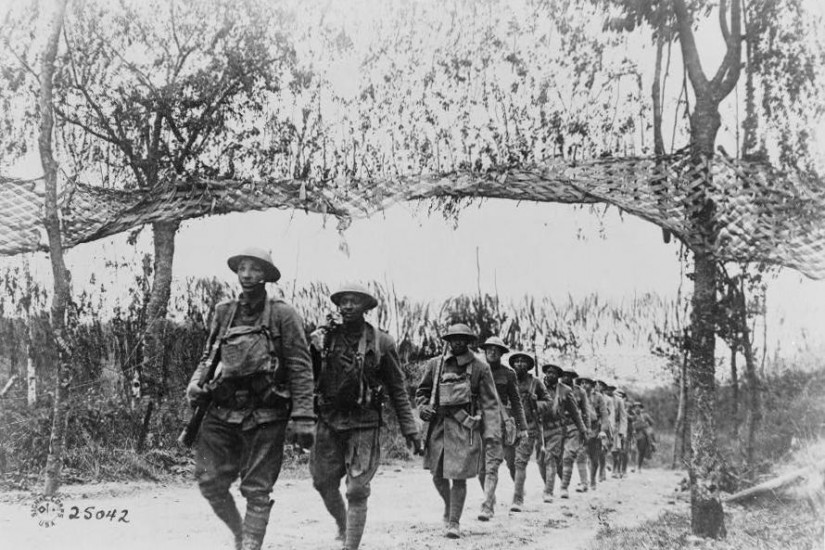 A picture of African-American soldiers in an all black division, marching in France during WWI.
Wikimedia Commons
…

When the Civil War broke out, the Union was reluctant to let black soldiers fight at all, citing concerns over white soldiers’ morale and the respect that black soldiers would feel entitled to when the war ended. But, as the Union death toll increased, the skeptics relented. By war’s end, almost two hundred thousand black men had enlisted. This is widely known today, thanks in large part to works of art like the 1989 film “Glory.” Unfortunately, less cultural bandwidth has been devoted to what happened to those black troops after the fighting stopped. Few high-school or college students, when they learn about military history, learn about the lynching of black veterans.

In 1867, when Reconstruction ended, black veterans living in Southern states quickly became targets for white violence. White newspapers spread rumors of black soldiers assaulting white police. States across the South prohibited blacks from handling weapons. Compared to those who had not served, former soldiers were disproportionately assaulted, driven from their homes, and, in the most extreme cases, lynched in public. “Targeting Black Veterans” traces this trend in coolly objective prose, occasionally detailing shocking examples. “At Bardstown in Nelson County, Kentucky, a mob brutally lynched a United States Colored Troops veteran,” we learn. “The mob stripped him of his clothes, beat him, and then cut off his sexual organs. He was then forced to run half a mile to a bridge outside of town, where he was shot and killed.”

When the First World War broke out, black thinkers and writers debated the merits of signing up to fight for a country that functionally denied them full citizenship. Three hundred and eighty thousand black men heeded W. E. B. Du Bois’s call to enlist in the segregated Army, many of them hoping that doing so would increase the standing of blacks on the home front. But for much of white America, front-line military service by blacks undercut the claims of racial superiority around which their lives—and their economies—were structured.