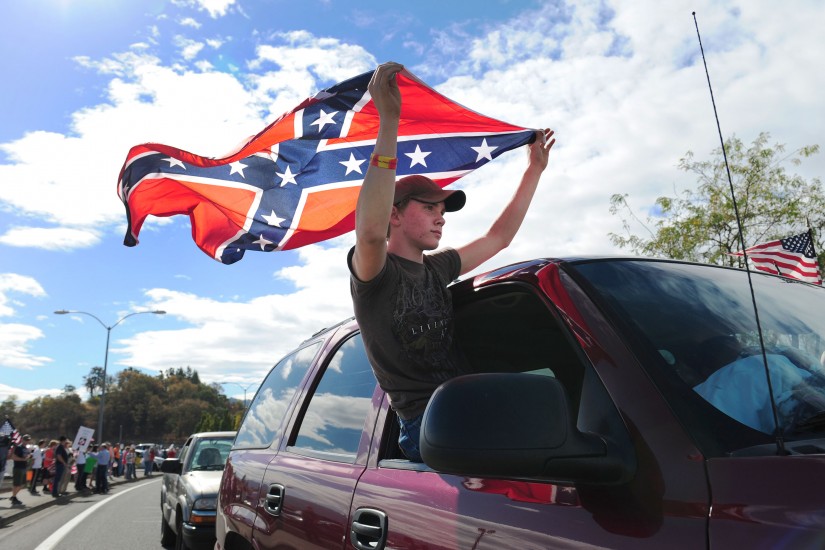 Chance White holds a confederate flag as he drives past people protesting President Obama's visit to Roseburg, Oregon on October 9, 2015.
Steve Dykes/Getty Images
…
There are monuments to Union units and commanders across the North. Once upon a time, the acts of heroism they commemorated were part of every good citizen’s civic education. It is normal for a war and its heroes to fade from living memory. But we still sing a national anthem about a meaningless bit of symbolism from an even more forgotten war, and we as a nation still tell ourselves comforting stories about how we beat the Nazis and freed Europe. At a certain point, we stopped telling ourselves about how we freed the United States.
Like most civic religions, the erstwhile Northern celebration of its Civil War victory oversimplified and sometimes distorted history in the service of mythmaking and the inculcation of loyalty. Some of the men Custer led in defense of the Union would follow him in his postwar mission of ethnic cleansing against American Indians. For years, the histories ignored black soldiers and left out or justified the shameful Northern abandonment of the Reconstruction project and the great betrayal of freed black Americans. But the self-serving stories that white America told itself were at least in the service of convincing Northerners they had been on the side of liberty and justice, and if those are the values you’re told your ancestors fought for — if those are the ideals you think your group stands for — it’s possible to persuade you to try to live up to them. If you identify instead with an amorphous, whites-only “rebellion,” nothing will appeal to you but pure reactionary resentment.

Every Confederate flag in the North is a confession. Each one gives away the entire charade. How can it possibly be about heritage or the other tired euphemisms its Southern defenders trot out? There is no Confederate history to remember, let alone honor, in Minneapolis. Every Confederate flag flown outside the slave states is as close as we will get to an admission that the flag represents whiteness, not Southernness. It is a symbol of white solidarity and an announcement that the flyer’s allegiance to white identity trumps all the other possible allegiances – to country, region, religion and class – they might otherwise honor.