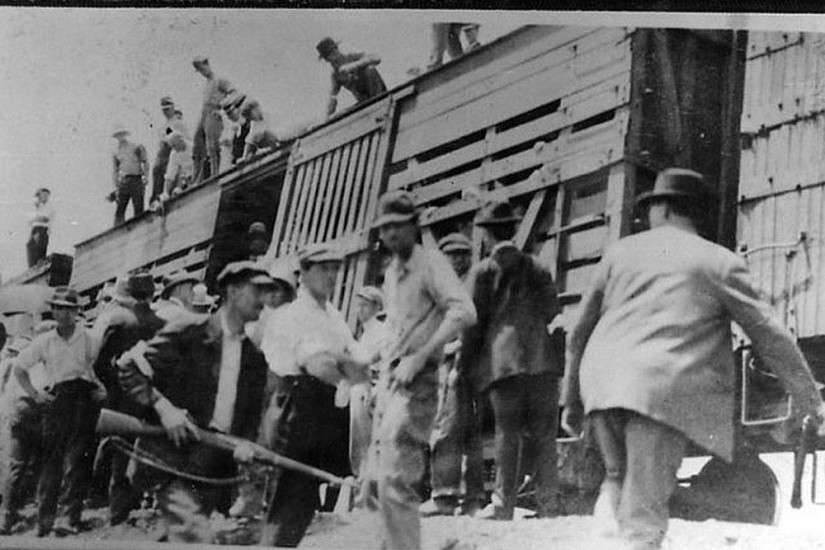 Robert Greene: One of the things that is extraordinary about the Deportation is that there are dozens of photographs of it. Most that you see are of the long lines of people being marched through town. When these images are seen, most people think: first, how could this happen in America, and second, what other things remind one of an event like this?

But those images and the reactions they provoke take you out of the story—and almost force you to compare the Deportation to other places or moments in history—prison camps, or even the Holocaust, for example.

But the Deportation happened in a particular context, in a particular tiny town. The image here is the one I could not stop looking at and thinking about. The perspective is unusual: it’s looking up the hill toward the cattle car, and there is action in the scene. You can’t tell who’s being thrown onto the car, but you see a mob on top and around it. There’s a guy with a gun and it’s a very active image—he’s actively moving with a gun, and what looks to be a deportee is staring at the camera.

Katherine Benton-Cohen: I learned so much from your discussion of that image, because I don’t see it through a moviemaker’s lens.

Greene: In movies, anytime someone is looking at the camera, it’s basically an indictment of us as viewers. The image itself looks like it’s a scene taken from a Western. When you think about what might be going on in the photographer’s mind, the image he’s creating might be seen as an expression of the idea of the “Wild West.” With this framing, in this dangerous moment, the photographer is essentially re-creating the myth of Wild West. The image captures vigilantes learning to be vigilantes in real time. It’s a human drama, full of mythologies and enactment, and for me, that aspect moves it from abstract history to an urgent image of the present.