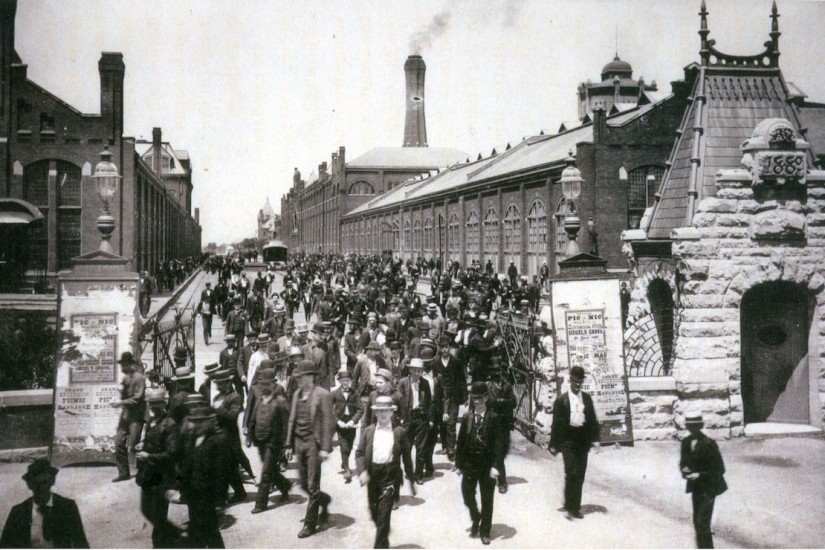 Workers leave the Pullman Palace Car Works, 1893. From "The Story of Pullman."

Every year in early September, a variety of reminiscences are published to explain Labor Day’s origins. The stories describe how the Pullman Strike of 1894 changed American labor laws and led President Grover Cleveland to create the holiday to appease workers after the strike ended. (This version of history has been debated.) Rarely do we hear the full story, one that would let us see how the strike and its leader, Eugene Victor Debs, subsequently helped galvanize the socialist movement in America. Many also fail to show how the strike should serve as a warning for union organizers for the next century.

Let’s start from the beginning, or from a beginning. George Pullman, the railway mogul and industrialist who owned the Pullman Car Company, founded the company town of Pullman for around twenty thousand of his workers and their families in the Southeast Side of Chicago in the 1880s. He charged his workers rent and imposed a behavioral code they needed to follow in order to remain in Pullman. For a time, the “model town” and its supposedly utopian vision of a working community won praise from the national media. (The neighborhood was made into a national monument in 2015 by President Barack Obama, highlighting its complex history.)

Pullman was designed to keep workers content enough to avoid unrest. The buildings were magnificent, everything was inordinately clean, homes had personal yard space in addition to expansive public parks, with maintenance and sanitation covered by the company. By building an appealing environment that seemed to focus on the health and contentment of its inhabitants, Pullman hoped to entice a skilled workforce to join him—and to avoid strikes. Though workers had access to libraries, churches, parks, shopping, and a man-made lake, there were also strongly enforced prohibitions against newspapers, town meetings led by workers, public speeches, and even taverns. Residents had to adhere to cleanliness standards, which largely existed only to give inspectors an excuse to invade their homes. A Pullman pastor explained: “It is a civilized relic of European serfdom.” It was a company town controlled by a paranoid baron who felt insecure about his power and did all he could to keep his employees placated enough to stay quiet—and it worked, until it didn’t.

The inherent inequality of this paternalistic structure was revealed during the economic depression of 1893, when manufacturing demand fell, pushing employers to cut wages by 25 to 30 percent while rent remained the same, making it increasingly difficult for workers to afford living even in a company town. As the story goes, a group of workers ventured to air their grievances with Pullman himself. He had them fired. Soon after, on May 11, 1894, many workers voted to strike and walked out.