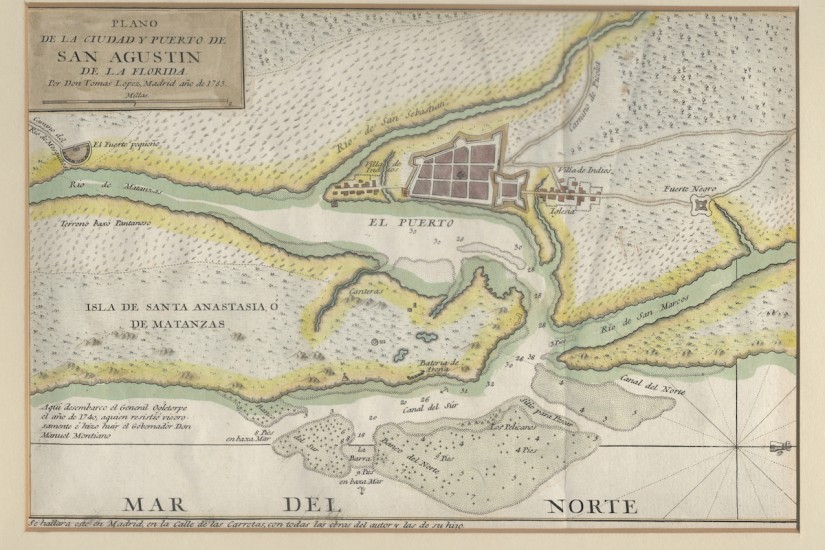 Map of St. Augustine and Fort Mosa, 1783.
University of Florida/Bitter Southerner
…
St. Augustine stood in stark contrast to the white European cultural hegemony that pervades colonial narratives. The Panglossian blueprint for America, as we often perceive it today, was devised in Spanish Florida, an earnest Spanish experiment before an American one. It’s not an overstatement to say that in 1741 the first city looked more diverse than it does today. Indeed, this notion of diversity still seems aptly provisional and elusive.

The free blacks of St. Augustine fished and hunted, were building contractors, rounded up wild horses and cattle, tracked escaped prisoners. They owned land and generally fared for themselves. When the mullet weren’t biting, they were given corn and beef from government stores. But as the number of runaway slaves increased and the threat of British encroachments loomed, a new administration in Spanish Florida ordered Fort Mose rebuilt at a larger site adjacent to the original one. In 1752 — after living within the city limits for nearly 12 years — the black community in St. Augustine was moved, more or less forcibly, back to their billet on the outskirts of town.

Meanwhile, in the Bahamas, the artful Menendez had prevailed once more. As Landers writes, “Francisco Menendez might well have been among the ‘disappeared’ of the era; however, as he proved many times, Menendez was a man of unusual abilities. Whether [he] successfully appealed for his freedom in British courts as he had in the Spanish, was ransomed back by the Spanish officials of Florida, or escaped is unknown, but by at least 1759 he was once again in command at Mose.”

Menendez returned to St. Augustine as it had looked before Bloody Mose, not with its black citizens living in the city center, but on the periphery. To make matters worse, it was also spiraling into bankruptcy.

By the early 1760s, Spain’s sustained effort to populate and build the inhospitable Florida frontier into a viable colony was a resounding failure. Spain would ultimately go broke on the prospect of Florida. It was nearly impossible for residents of Mose to meet their own needs, and the Spanish government could no longer afford to subsidize the fort.

The geopolitics of the day forced Spain into ceding Florida to Britain as a ransom for Cuba (although Spain would temporarily regain control of Florida after Britain’s defeat in the Revolutionary War).

Once there was no more Spanish St. Augustine, there was no reason for a Fort Mose to protect it. The fort served an invaluable objective for the city in its time, a “negroid littoral” as the scholar Leon Campbell put it. Had the residents of Mose not been placed directly in the line of fire, they might have avoided military conscription. Then again, armed combat against one’s former captor might have satisfied a palpable, bloodthirsty vendetta. A pure, exploitable emotion.

In August of 1763, at age 49, Captain Francisco Menendez, his wife Maria de Escovar, and the 50-odd remaining residents of Fort Mose sailed to Cuba on a schooner named Our Lady of the Sorrows. They landed in Ceiba Mocha and, alongside their Spanish compatriots, christened their new settlement San Agustin de la Nueva Florida (Saint Augustine of the New Florida). No descendants of the original fort were identified, living or deceased. Likewise, nothing of Menendez’s remaining years has survived.

Thus ended, at least for two more centuries, the story of Fort Mose.