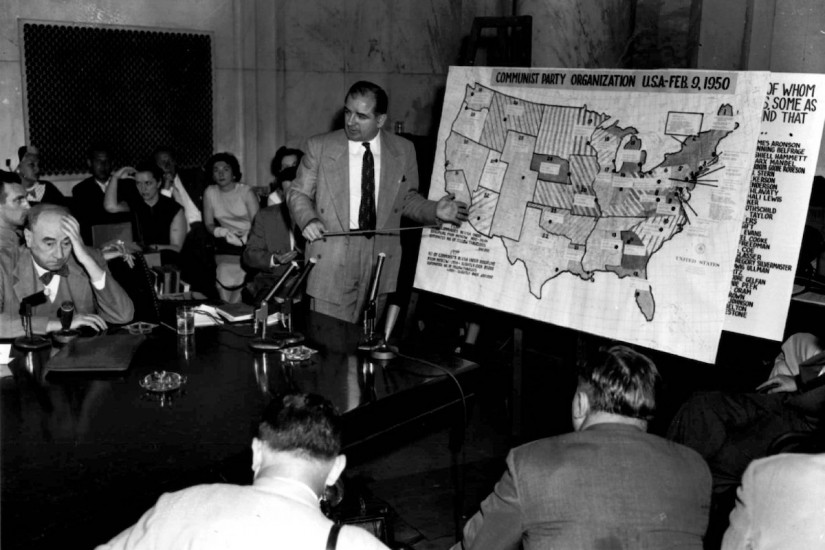 President Trump’s critique of Khizr and Ghazala Khan back in 2016 was supposed to be it—our “Have you no sense of decency, sir?” moment. More recently, the last straw was supposed to be when Sarah Huckabee Sanders refused to answer CNN’s Brian Karem after he asked whether she had any “empathy” for separated immigrant families. Then it was supposed to be FBI agent Peter Strzok “destroying” the House Judiciary and Oversight committees. Every day, we yearn for this kind of release—for an upright man to ride into town and deal the dragon a killing blow, to the general jubilation of the populace. But we’re not going to get that moment, and it’s not just because, as James Traub wrote in the Atlantic after the Strzok hearing, our present-day partisan split has rendered the GOP shameless. It’s also because that moment isn’t quite what we remember.

During the televised Army-McCarthy hearings in June 1954, Army counsel Joseph Welch famously asked that question of Sen. Joseph McCarthy after McCarthy brought up the details of a young lawyer’s past membership in a left-wing professional association accused of communism. We tend to recall the query as a narrative coup de grâce coming out of nowhere. But the “no sense of decency” line worked because most of McCarthy’s party, at that point, was finally done with him. The Army-McCarthy hearings were a product of President Eisenhower’s decision to try to curb McCarthy’s power. Bringing McCarthy down required the leveraging of moderate Republican distaste for McCarthy’s personality and methods, the novelty of the televised hearings, and a little bit of sexual panic. In the course of the proceedings, the senator’s enemies used Cold War homophobia—which McCarthy had gleefully amplified in his own crusades—against him, making insinuations about relationships between members of his staff. That’s a factor that makes Welch’s takedown, powerful though it was, look a little less righteous.