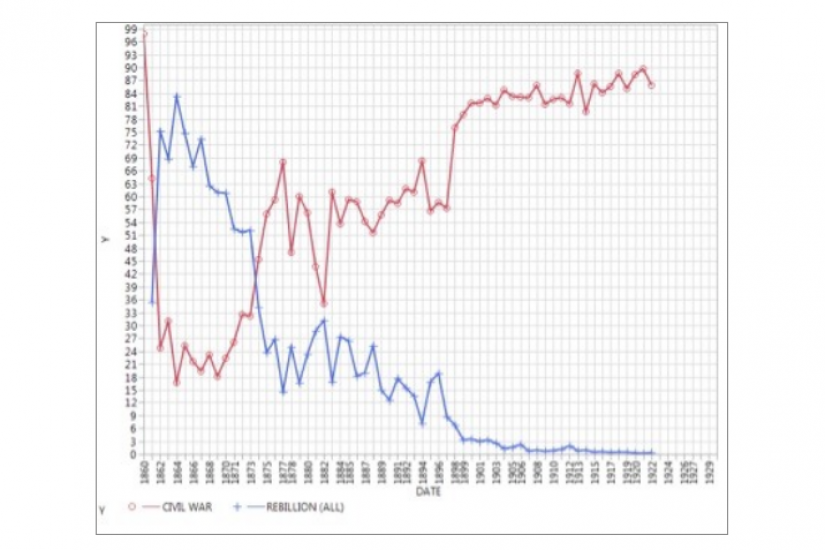 Northerners supported the use of Civil War in part to accommodate their former foes, who maintained secession was legal and therefore they had not been rebels. White southerners considered Rebellion not just inaccurate, but insulting, particularly after the term became associated with labor and anarchist violence in the 1880s. The northern shift in usage, therefore, reflected a commitment to reunion and to at least a degree of sectional reconciliation. During the Spanish American War, many thought, the South had proved its loyalty and nationalism. Intensifying racism, North as well as South, no doubt also played an important role. The North’s concessions to the white South’s feelings, however, had limits. Overwhelmingly, northerners refused to accept War Between the States, which they rightly viewed as acknowledging the justness of secession.

Some white southerners still insisted on War between the States. And some African Americans still chose names that emphasized the centrality of slavery and emancipation to the war, as Frederick Douglass and other African Americans had during the Civil War, when they promoted names such as Abolition War or The Slaveholder’s Rebellion. For most people in the North and South, though, Civil War was the war’s name.

The choice reflected and facilitated reunion and reconciliation, but at the cost of obscuring the causes and consequences of the war. Civil War also made it all too easy for both sides to continue to believe their actions has been noble and justified, their behavior honorable. Neither side wrestled, as Lincoln’s second inaugural address had urged Americans to do, with their own and the nation’s failings.   Reconciliation proved a positive development for the country but came at that high price. It rested on a sense of mutual innocence and contributed to the nation’s failure to understand the meaning and implications of the war.

The choice of the name Civil War, therefore, certainly reflected and may have contributed to the failure to construct a memory of the Civil War that encouraged Americans to address the centrality of slavery to the war and in American history and to ask whether the country had lived up to the war’s achievement of emancipation by promoting racial equality.