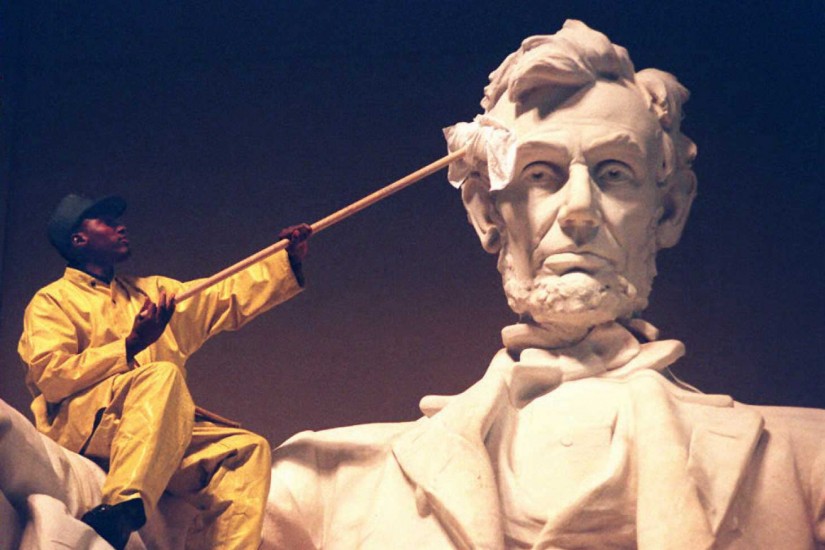 A worker cleans the statue of Abraham Lincoln as part of the annual cleaning of the Lincoln Memorial, 1995.
JOYCE NALTCHAYAN/AFP/Getty Images
…

Lincoln left the solitude of the sidewalk. He walked across the square, entered the House of Representatives, and stood before the more than 1,000 delegates of the Illinois Republican State Convention. “A house divided against itself cannot stand,” he declared. “I believe this government cannot endure, permanently half slave and half free … It will become all one thing or all the other.”

The prophetic speech propelled Lincoln onto the national stage. Three years later, as president, he was commanding an army that battled to keep the house standing. His opponent, the Confederate States of America, was fighting to destroy the house and to build a new one safe for slavery.

Lincoln saved the old house, with the decisive assistance of black troops. Though he didn’t live to see it, the ratification of the Thirteenth Amendment in 1865 ensured that the United States would be permanently free. But the racism that buttressed slavery remained in the living constitution of American policy and the American mind. The house remained divided, remained separate and unequal.

It remains divided today. One hundred sixty years after Lincoln warned of the dangers of disunion brought on by slavery, Americans must bear witness to racism’s destructive power. This government cannot endure, permanently half racist and half antiracist.

Slavery divided the nation in two, politically and geographically. The threat racism poses to the contemporary United States is more insidious for being more diffuse and more veiled. But trace the issues rending American politics to their root, and more often than not you’ll find soil poisoned by racism. None of these issues is likely to tear down the republic as slavery nearly did, but the danger is no less existential.

Some of the assaults that racism has mounted on American society are well known and recall Lincoln’s era in their brazenness. “I do not regret what I did,” Dylann Roof journaled six weeks after killing nine black churchgoers in Charleston, South Carolina. America may not be on the precipice of civil war, but the events in Charlottesville, Virginia, last year revealed that there are white nationalists who are prepared for violent conflict, convinced that demographic shifts will deprive white Americans of their power and privilege. They came out into the public square chanting, “You will not replace us!” and “Blood and soil!”

The racism motivating other divisions in American democracy is only somewhat more subtle.