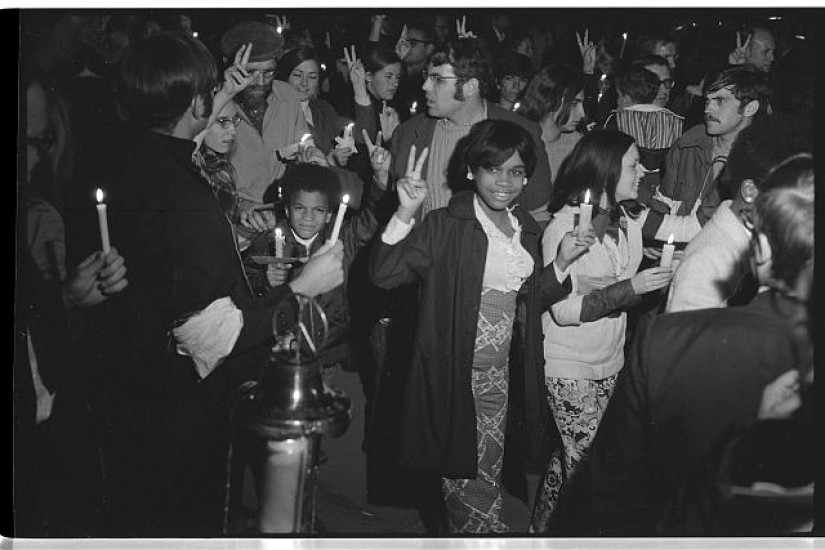 Demonstrators carrying candles at a night march to the White House, led by Coretta Scott King as part of the Moratorium to End the War in Vietnam, October 15, 1969.
Library of Congress
…

“Religion” may be too solemn a word for many 1960s radicals, but it helps to capture the depth of their motives: above all their longing for a more direct, authentic experience of the world than the one on offer in midcentury American society. What made radicals mad, what drove their deepest animus against the war, was their sense that it was a product of the same corporate technostructure—as John Kenneth Galbraith called it in The New Industrial State (1967)—that reduced everyday life to a hamster cage of earning and spending. The tribunes of the technostructure were men like Robert McNamara, who shuttled from the Ford Motor Company to the Defense Department to the World Bank, and who seemed to know everything about managerial techniques but nothing about their ultimate purpose, if indeed there was one. Elite managers were the high priests of an orthodoxy with a blankness, a vacancy, at its center.

The fundamental expression of this vacuity was the war machine that multiplied corpses in Vietnam and nuclear weapons throughout the world. King acknowledged the connection between managerialism and militarism at Arlington Cemetery in February 1968, when he said, “Somewhere along the way we have allowed the means by which we live to outdistance the ends for which we live.” A society of means without ends was a society without a soul.

Antiwar radicals, recoiling from soullessness, challenged the church of technocratic rationality. Taking this challenge seriously, recovering the mood of an extended moment, requires beginning earlier and ending later than 1968. Cultural upheaval cannot be confined by the calendar. At least one contribution to the literature, the music industry executive Danny Goldberg’s In Search of the Lost Chord, treats 1967 as the defining moment when “the hippie idea” still held transformational promise, and countercultural protest had not yet succumbed to police violence, undercover provocateurs, or media caricature—while 1968, in contrast, was a dark time of assassinations, riots, and the resurgence of the right.

Goldberg’s perspective, though true to the events of the time, neglects the deep historical roots of the 1960s counterculture. Its philosophical lineage stemmed from the Romantic critique of Cartesian dualism’s separation of the knowing scientist and the knowable inert matter of the natural world; hippies who had never heard of Descartes were reenacting earlier utopian efforts to move “back to the land” and live more harmoniously with nature. The countercultural impulse arose as well from the antinomian Protestant tradition, which urged believers to withdraw from institutions that obstructed a direct relation with the divine, and it flowed more immediately from Christian existentialism, which celebrated the renewal of personal meaning and purpose through the risks of independent religious commitment.
…
View on New York Review of Books
View Connections