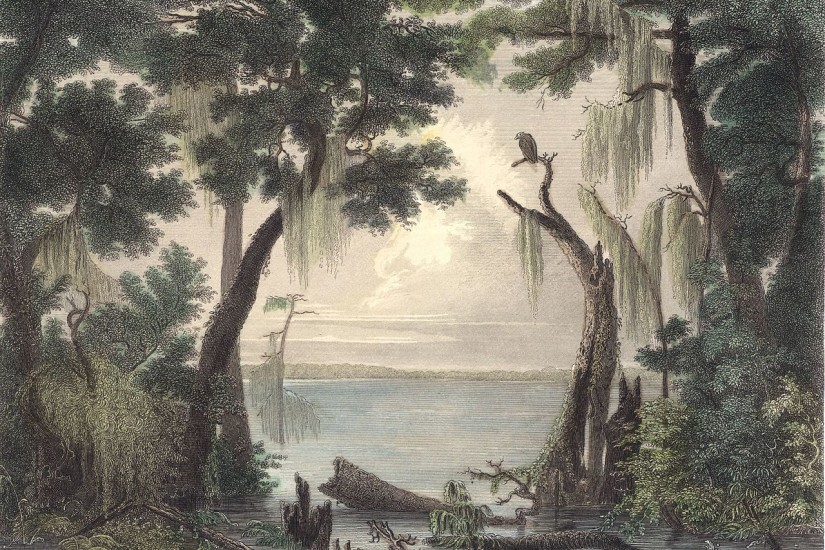 The Lake of Dismal Swamp (2013).
State Archives of North Carolina/Wikimedia
…

What do these people think a swamp is? What does Trump? It’s useless to wonder what the president “means” by any particular locution, of course, but the widespread embrace of his awful rhetoric is a bit disheartening, suggesting a shared alienation from the natural world. It bespeaks an impoverished collective imagination that “drain the swamp” can represent an act of cleansing rather than a catastrophe — which, ecologically, it is. The phrase emerged when swamps were thought of as little more than alligators and malaria, but they’ve since been relieved of that bad reputation. They’re now called wetlands and recognized for their biodiversity, as a landscape that enhances our experience of being in the world rather than impedes it. An obvious joke, but a true one: comparing politics to a swamp is unfair to the swamp.

There’s a sense, though, in which the phrase is an apt description of what Trump is up to. This sense goes back to the beginnings of the republic — indeed, to the European invasion of the continent, which inaugurated a centuries-long program of wetlands destruction.

For early colonizers, swamps posed a problem of category: neither land, which people thought of as private, nor water, considered public. Their ambiguity made them suspect. They were, moreover, dark and smelly, unnavigable, pestilent, deceptive — any step could be a sinkhole, sheltering alligators and cottonmouths. Swamps were physically low places, the opposite of how white Americans wanted to see their land: as a shining city on a hill. European colonists “projected a moral landscape onto the physical landscape of the New World,” writes Ann Vileisis in her authoritative history, Discovering the Unknown Landscape: A History of America’s Wetlands. They didn’t even have a word for what they were looking at, and the boundaries of what they settled on stayed fluid; swamp can cover a lot of terrain, from tidal marshes to cranberry bogs. The definition Americans returned to most often was the capitalist one: they thought of swamps as land that simply had yet to be turned into land through drainage. The swamp was defined by what it wasn’t, or wasn’t yet, and by its resistance to being made useful.