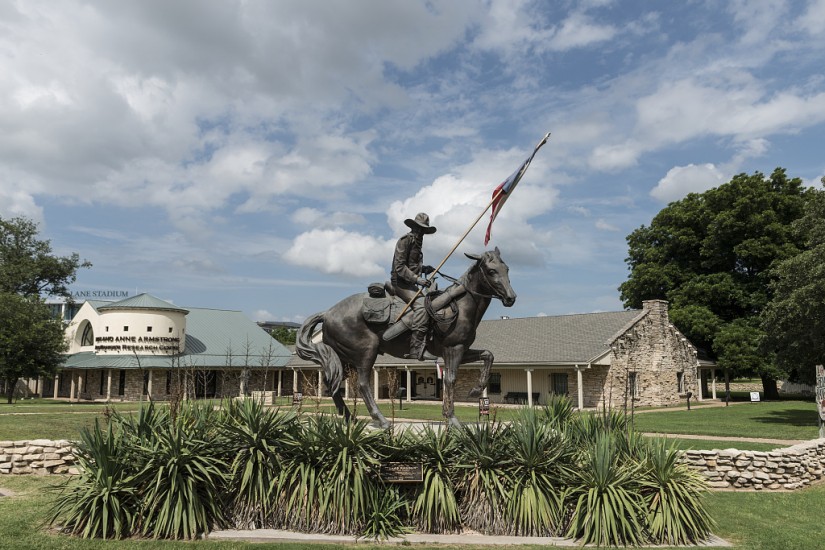 "Texas Ranger," a sculpture by San Antonio artist Don Hunt at the Texas Ranger Hall of Fame and Museum in Waco, Texas (2014).
Library of Congress
…

The Injustice Never Leaves You focuses on the 1910s, which, due partly to spillover from the Mexican Revolution, was one of the bloodiest periods in Texas history, leaving hundreds, perhaps thousands, of Mexicans dead along the border. But Martinez doesn’t settle for describing the incidents of madness and violence themselves. Her main concern is with the sharp divisions wrought, even today, by the pain of old injustices.

Much of the book is structured episodically, with a chapter apiece devoted to three terrible crimes: the 1910 lynching of twenty-year-old Mexican immigrant Antonio Rodríguez in Rocksprings; the 1915 murder of Tejano landowners, businessmen, and public officials Jesus Bazán and Antonio Longoria by Texas Rangers in Hidalgo County; and the 1918 Ranger massacre of fifteen Tejanos between the ages of 16 and 64 in the small West Texas community of Porvenir. Later chapters take a broader perspective, portraying the state’s fixation with violence and its symbols (public celebrations, reenactments, photographs of lynchings) as a kind of idolatry and examining the roles of amateur and professional historians in constructing our collective sense of Texas’s past.

Though The Injustice Never Leaves You is a page-turner, it’s not easy reading. Nor should it be. It is a haunting book. Martinez’s careful dissection of the murder of Rodríguez exemplifies her unsparing approach. She depicts the crime that started the chain of events—the murder of an Anglo woman—and the mob mentality that quickly cast the blame on Rodríguez, a laborer who happened to be nearby. The reader learns details of the lynching (a mob kidnapped Rodríguez, tied him to a mesquite tree, and burned him alive) and old theories about the woman’s murder (some believe her husband did it), but Martinez focuses more intently on the episode’s aftermath. For more than a century, the Hispanic residents of Rocksprings have refused to forget the tragedy. Even to this day, they see the lynching as a curse that continues to poison relations between local Anglos and Hispanics. “It’s always been like this in this town. It’s not going to change,” local resident Vincent Vega told Martinez of the legacy of Rodríguez’s murder. “We’ll speak to each other, but that’s about it. That’s how things are. There’s just too much hate.”