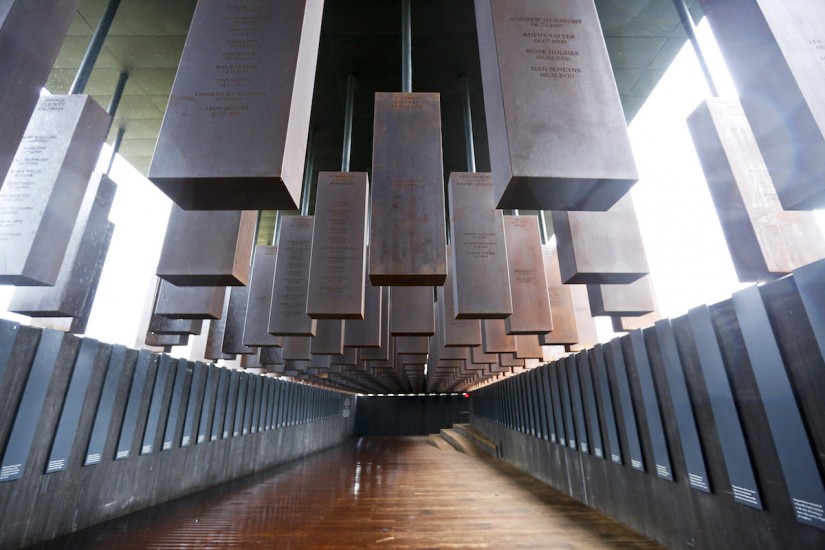 Until recently, Montgomery’s boosters have preferred to emphasize the heroic, redemptive history of Rosa Parks and the Dexter Avenue Baptist Church, where the bus boycott was organized, in telling the story of the city’s role in America’s racial history. The opening of the Memorial for Peace and Justice has shifted that public history, giving it a new, undeniable center of gravity in the solemn edifice at the top of the hill.

It really should have been public, and free. But since it took a private entity to conceive, fundraise, and build this acknowledgment of our national shame, there is some rigmarole at the entrance—a small fee, but cash is not accepted; you are encouraged to save through a joint ticket for the museum, but it must be purchased online. There is also a metal-detecting portico and wand inspection. There are people angry that this memorial exists.

The power of the place takes over once you step onto the grounds. Simply put, the memorial’s design—by the Boston-based collective MASS Design Group—is a triumph. Its organizing device is suffocatingly strong. The pillars begin set on the ground like trees in a forest, then rise up as you advance, suspended from the ceiling as the floor slopes down, growing denser all the way. But more than how many were lynched—there are roughly 4,400 identified here, killed between 1877 and 1950, but we know there have been many more—what strikes you is just how much was lynching: the prevalence, the normality, and how denial of humanity accelerates violence into frenzy.

Most of all, it forces implication. As I walked through the hangar-like space, taking photographs to serve as visual notes as I always do, my arm grew heavier as the pillars lifted off the ground and rose above my waist, my shoulders, my head.