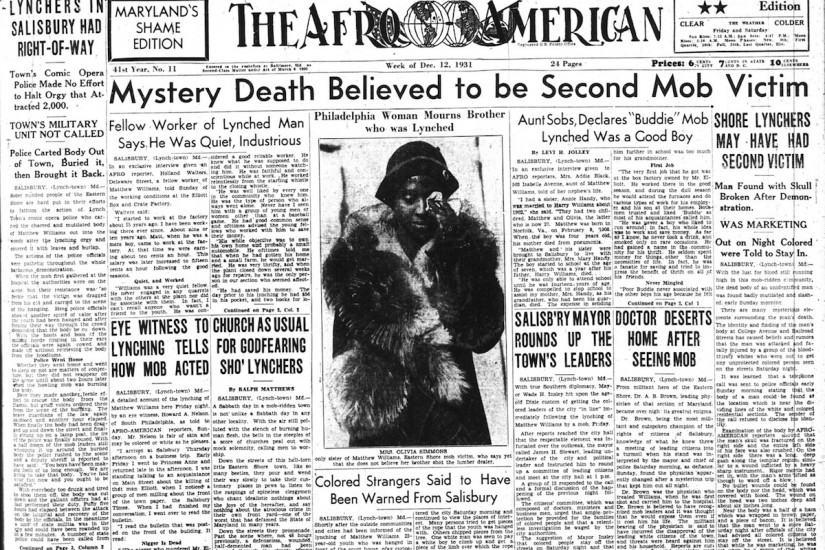 The front page of the December 12, 1931 Afro-American covers the lynching of Matthew Williams in front of the Salisbury, MD courthouse.
flickr.com/washington_area_spark
…

From the very beginning, when papers described the killing as an “axe murder,” a consistent pattern of inflammatory disinformation plagued coverage of the story. This hyperbolic and inaccurate reporting in the local papers of the Shore had dire consequences, however. The more brutal the crime alleged to have been committed by a black assailant, the more whites could feel justified in subjecting the black defendant to the barbarity of a lynching.

Race was an explicit dimension of the local papers’ report on interracial crimes. Black defendants were expressly identified by race, and their guilt in local papers seemed a certainty. The names of black defendants were optional. A black defendant could just as easily be referred to as a “confessed Negro slayer” as by his name. When Matthew Williams allegedly shot D. J. Elliot, the headline in the Salisbury Times simply read, “Negro Kills D. J. Elliot Then Self.”

The local papers were unabashedly partisan. Their interest in presenting Shore whites in the best possible light was openly admitted. When Matthew Williams was lynched, this protectiveness went into overdrive. The Salisbury Times took the extraordinary step of deciding not to report on the lynching. Both publishers of the newspaper, Charles and Alfred Truitt, observed at least part of the lynching. Charles Truitt, in particular, saw Matthew Williams hung outside the courthouse. Charles Truitt was the AP correspondent for the Shore and dutifully wired his story to the AP describing the lynching of Williams. But he refused to publish what he saw on the night of December 4th in his own paper.

On December 5th the headline of the lead story in the Salisbury Times was about the lynching, although that word was never used. The headline read, “Coroner’s Jury to Investigate Slayer’s Death.” The first paragraph provided only a bare-bones account of what had happened: “Matthew Williams, confessed slayer of D. J. Elliot at his office yesterday afternoon, was removed from the Peninsula General Hospital last night and hanged in the Courthouse yard. The hanging was witnessed by hundreds of people.” That account is the only description of the lynching that ever appeared in the Times.