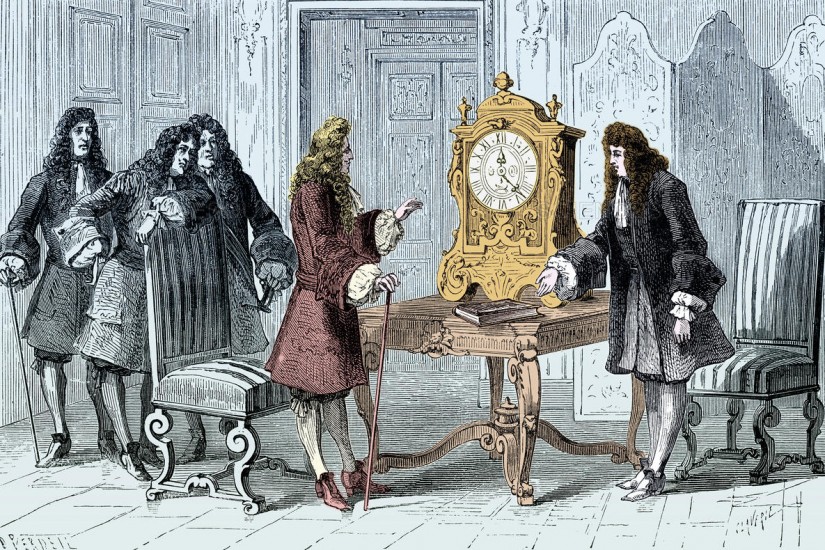 Within just a few years, clockmakers in the Netherlands and England were able to keep the time, accurately, to within a few seconds over the span of a full day. For nearly 300 years, until the early 20th century, the pendulum clock remained the most accurate timekeeping standard accessible to humanity.

The American continents, however, then known as the New World, had no such clockmakers available. It wouldn't be until 100 years after Huygens that the first American-made pendulum clock was constructed. The way, then, to keep time more accurately than a sundial would be to take one of the world's best, Dutch-made clocks, and bring them, via ship, to the New World.

Any motion would disturb the period of a pendulum, so accurate timekeeping — at that time — was only possible in a stationary location. The clock would be constructed and calibrated in the Netherlands, shipped overseas, and then restarted at its destination. Compared to a sundial, whose accuracy was limited to about ±15 minutes a day, the pendulum clock should have reduced those errors to merely a few seconds.

As soon as the clock arrived and was set up, it began keeping time more accurately than any timepiece before ever located on the North American continent. At least, that was what everyone assumed was happening for about a week or so. But after that amount of time, it became clear that something was amiss. The Sun and Moon weren't rising at their predicted times, but rather were off by a bit.

Even worse, the amount that the clock was off by appeared to be getting worse over time: whatever error was at play was accumulating. Instead of these reliable, celestial events occurring at the predicted times on the clock, they were occurring earlier, according to the clock. Something was wrong. The clock was not only running slow, but appeared to be losing close to a minute per day.

This was completely unacceptable! Timekeeping, by the end of the 17th century, was accurate to within 2-to-4 seconds per day. Why would that be happening? The only assumption that the colonists of the New World could figure out — since there were no clockmakers (or clock-repair experts) present — was that the timepiece must have somehow been damaged during the journey.