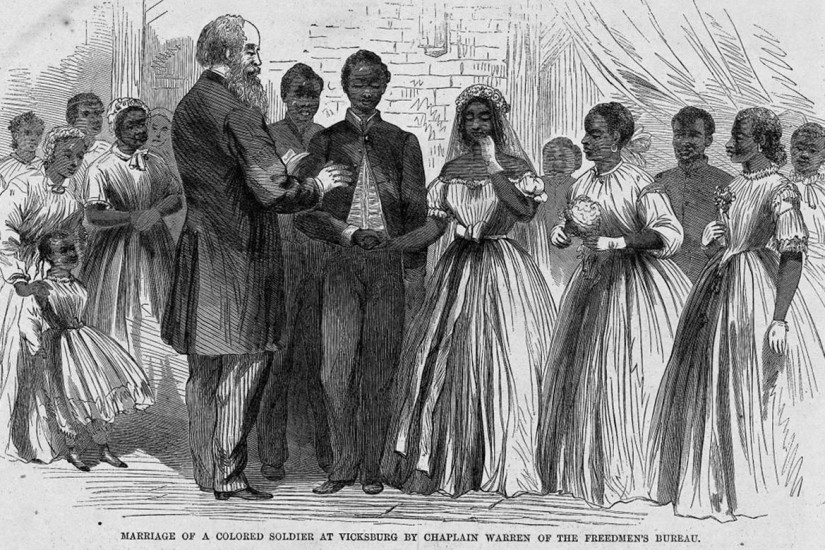 At issue in the years following the Civil War in the former Confederate States of America were the marriages of former slaves, unions that some whites did not want the law to legitimate. [Hunter] writes, “Many local jurisdictions throughout the South demanded high fees to discourage ex-slaves from marrying or simply refused to give them access to courts or licenses”(241). The federal government opened up legal marriage, a legal institution that many nineteenth century Americans valued as the bedrock of society, a requirement of manhood and womanhood, and the only appropriate foundation of a family unit, to include former slaves during and after the war. Those chafing at social change in the post-emancipation South saw Black marriages as a challenge to social order and racial hierarchy.

Bound in Wedlock provides a timely reminder that the right to marry and marriage law has long been a battleground for social justice and equality. It has only been fifty-one years since Loving v. Virginia made anti-miscegenation laws, statues that prevented interracial marriages, illegal. Local legislatures denied enslaved people the right to marry in the United States beginning in the nation’s colonial history. Slaveholders regularly split up couples, overrode the parenting decisions of enslaved mothers and fathers, and sexually abused their human property with no fear of punishment. Slaveholders went as far as espousing the idea that African Americans were unable to make family attachments, that Black parents had little regard for their children, and that white slaveholders acted in a parental role in the lives of their slaves. This paternalistic myth of kind slaveholders and childlike slaves remained embedded in early representations and histories of American Slavery into the early twentieth century.

Bound in Wedlock interrogates both the family-making practices of Black people in the nineteenth century and the evolution of marriage as an institution in the same period. Kinship was essential to Black people and many free and enslaved people valued marriage as a way to signify commitment and love. Marriage was a way to codify intimate relationships. However, it was also an expression of humanity. It was a right that could confer other rights, and it was an instrument of social control. Marriage was not a failsafe institution with the ability to right racism’s wrongs. The couples who jumped brooms, rushed to Union camps, or searched for each other in the chaos of the postbellum South thought marriage was important, not perfect.