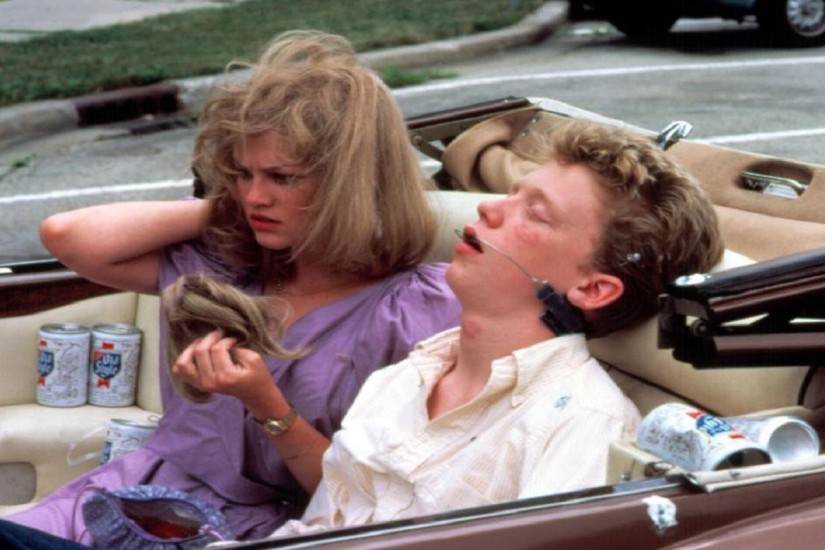 Caroline and the Geek, the morning after. (Sixteen Candles, 1984.)
Universal
…

Sixteen Candles isn’t a college sex romp like Revenge of the Nerds or Animal House. It’s a high school love story. It’s been celebrated for 34 years for its sweet, romantic heart. Yet it is entirely willing to feature a lengthy, supposedly hilarious subplot in which a drunk and unconscious girl is passed from one boy to another and then raped.

The drunk girl in question is Caroline (Haviland Morris), the girlfriend to romantic hero Jake Ryan, and if you know one thing about Sixteen Candles, it’s that Jake Ryan (Michael Schoeffling) is perfect. He is the impossibly cool, impossibly beautiful senior guy who is dating the impossibly beautiful senior girl — and yet as soon as Jake Ryan hears that gawky, awkward sophomore Samantha (Molly Ringwald) has a crush on him, he immediately begins to like her back, defying all the laws of God, man, and high school popularity.

Jake Ryan is the embodiment of a fantasy so compelling it instantly made Sixteen Candles iconic: What if the object of all your romantic high school dreams decided to pursue you without you having to expend any effort whatsoever, just because they could see that you were, like, deeper and more special than the rest of the school? What if they somehow saw that without you ever having to have a conversation or interact with them in any way?

“Jake stands the test of time,” wrote Hank Stuever in the Washington Post in 2004. He quotes a 34-year-old woman who grew up on Jake Ryan: “Oh, gosh, Jake Ryan. Just thinking about it now, I get … kind of … It’s all just too good to be true.”

Jake Ryan’s reputation as the ideal dream boy of every teenage girl’s deepest fantasies has lasted for decades. Jake, writes Stuever, “is Christ, redeeming the evil sins of high school. Jake as the ideal. Jake as the eternal belief in something better.”

Yet Jake Ryan cold-bloodedly hands a drunk and unconscious Caroline over to another guy and says, “Have fun.”

In 1984, you could be a perfect dream boy and also be an accessory to date rape. They were not mutually exclusive ideas. In fact, they reinforced each other.