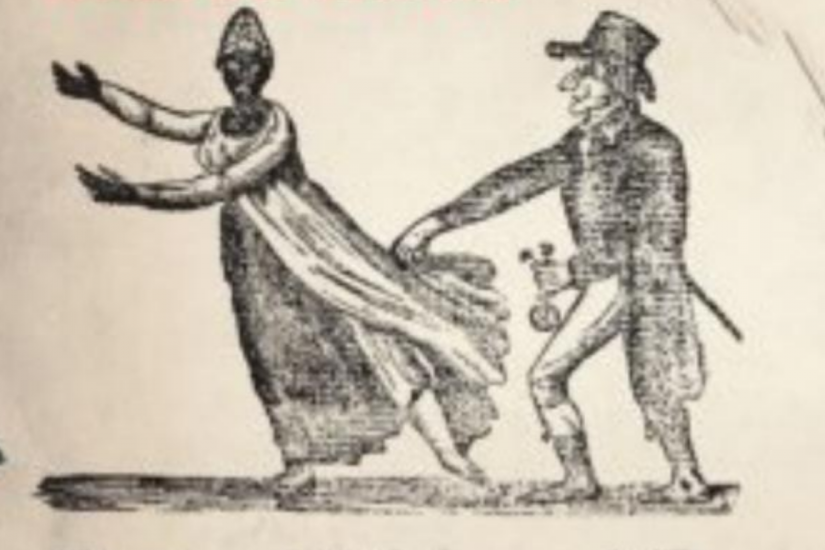 Illustration from a published sexual assault trial, depicting James Dunn trying to protect himself from prosecution by offering his fleeing victim a watch as part of an out-of-court settlement.
New-York Historical Society/Common-Place

In 1786, fifteen-year-old Barbara Witmer suffered a horrific assault. A group of men kidnapped her from her Pennsylvania home at gunpoint, and one of these men repeatedly raped Barbara before her family and friends managed to rescue her. Her rescuers quickly brought Barbara to a local justice of the peace to press charges against the attackers, but she had difficulty telling the magistrates about her ordeal. One justice of the peace asked her "8 or 10 times to begin" her testimony. When she said nothing, the justice decided that Barbara was "confused" about what had happened, so he gave up and went to bed. Another magistrate, however, seemed to understand that Barbara might be too traumatized to tell her story. Rather than immediately categorizing Barbara as a confused and therefore unreliable witness, he saw her as "very bashful" about what had happened to her. This justice "spoke very mildly & told her no one could hurt her for telling the Truth." After waiting through ten or fifteen more minutes of Barbara's silence, the magistrate called in her mother and uncle to provide support, and Barbara hesitatingly told her story. Eventually, six men were convicted in the attack. The man who had raped Barbara received a death sentence.

Because the rape of Barbara Witmer was an obvious and brutal assault, it made a relatively easy case for legal prosecution. More than a dozen witnesses testified that Barbara had screamed for help as the men carried her away at gunpoint, that she had seemed terrified, and that she had immediately run to her rescuers when they found her being held captive in a nearby house. Together, these witnesses removed one of the biggest barriers to the successful prosecution of rape cases in early America: the question of whether the woman had consented to the man accused of raping her. Given that the penalty for rape was a death sentence in colonial America and up to twenty-one years in prison in the early republic, courts required a woman to be exceptionally convincing in her accusation of forced sexual assault. Researchers in women's and legal history over the past few decades have discovered a fair amount about the courtroom prosecution of rape and other sexual crimes in early America. Especially by the eighteenth century, courts seemed loathe to prosecute many rape cases, and women often had great difficulty proving to an all-male jury that they had been raped. But how did such an intimate crime—with its horrifying blend of sex and violence—ultimately become part of a public courtroom proceeding?

Barbara Witmer's experience reminds us that obstacles to successfully prosecuting rape lay as much out of the courtroom as in it.