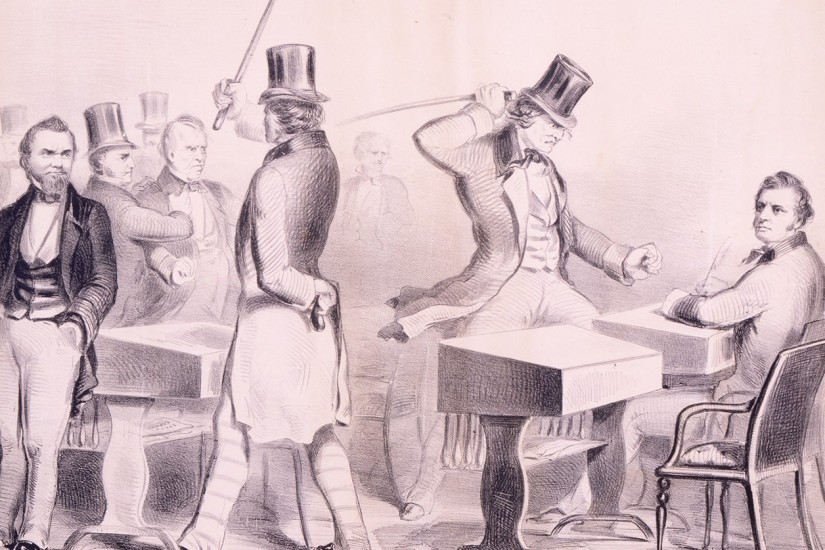 The caning of Senator Sumner by Representative Brooks, as depicted in an 1856 print of a drawing by Winslow Homer.
Library of Congress
…

This wasn’t Sumner’s first oratorical stab at the Slave Power, nor would it be his last. Like most of his speeches, it was polished to a sheen before delivery, typeset and ready for mass mailing by the time he stood to speak. As was his habit, Sumner was reaching for a broad national audience, hoping to rouse widespread public support for his cause. In many ways, given the unlikelihood that persuasion would solve the seemingly irresolvable slavery problem, Sumner wasn’t really speaking to the Senate at all.

With that larger audience in mind, Sumner let loose. He first discussed the brutal “rape” of Kansas by proslavery forces and condemned Southern “plantation manners” and his Southern colleagues’ habit of “trampling” congressional rules “underfoot.” The next day he outlined proposed remedies for the Kansas problem, demanding its admittance to the Union as a free state. Biting, defiant, and filled with sexual innuendo about slaveholders and their love of slavery, Sumner’s speech was a tour de force. It also fulfilled the wishes of many of his constituents and supporters, who had been urging him to strike at “Southern bravado” and “crush these fellows into submission.”

Throughout his speech Sumner took special aim at three senators who had attacked him during the Kansas-Nebraska debate two years past—James Mason, Democrat of Virginia; Stephen Douglas, Democrat of Illinois; and Andrew Butler, Democrat of South Carolina and a relative of Preston Brooks—insulting them personally as well as politically. Many Southerners felt the sting. “Mr. Sumner ought to be knocked down, and his face jumped into,” declared Thomas Rivers, an American Party representative from Tennessee. Butler’s friends felt that he was “compelled to flog” Sumner. Even as Sumner had been drawing his speech to a close, Douglas—pacing impatiently in the back of the chamber—had muttered, “That damn fool will get himself killed by some other damn fool.” Given that Sumner wasn’t a fighting man, he seemed to be asking Southerners “to kick him as we would a dog in the street.” Fearing that was the case, a few of Sumner’s friends asked to walk him home, but he refused.

The next day Brooks decided to take action. A newspaper account of Sumner’s speech confirmed that he had insulted Butler, South Carolina, and indeed the entire South. Considering it his duty as a South Carolina representative to resent the dishonor, Brooks decided to beat Sumner rather than challenge him to a duel because he knew that the New Englander would never accept a challenge, and because sending a duel challenge “would subject me to legal penalties more severe than would be imposed for a simple assault and battery.” Here was the dark logic of Washington’s anti-dueling law, which imposed a heavy penalty of lengthy jail time. Better to beat Sumner than to run the more severe legal risk of a formal duel challenge.

So on May 22, as Sumner sat at his Senate desk franking copies of his Kansas speech for mailing, Brooks entered the Senate, cane in hand.
…
View on Lapham’s Quarterly
View Connections