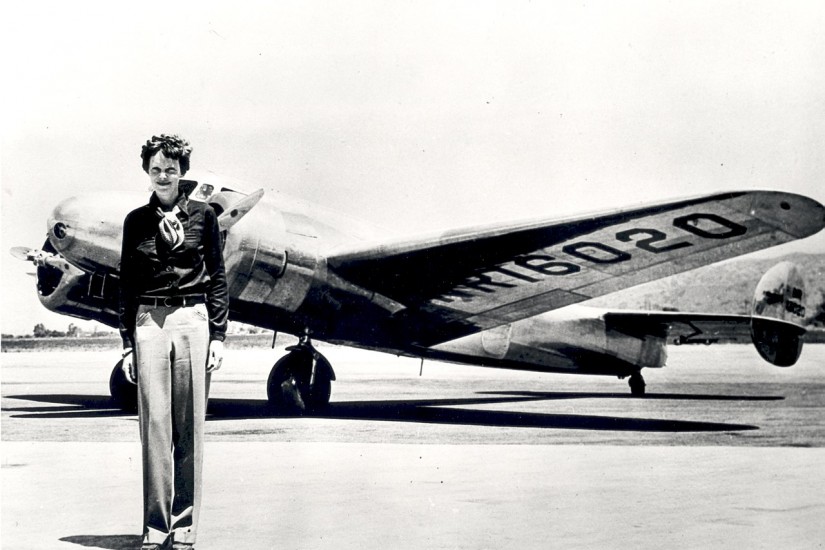 Pilot Amelia Earhart circa 1936, standing in front of the Lockheed Electra in which she disappeared.
flickr.com/nasacommons
…

Elder—brash and bold, at 24 years old, with her copilot, George Haldeman, at her side—was quickly the talk of New York. But she wasn’t alone. Three hundred miles up the coast, another woman was waiting as well for the weather to break—with dreams, money and an airplane of her own. Frances Grayson, a self-made real estate agent from New York, had dubbed her hulking seaplane the Dawn because this was a new day, a time for strong women like Grayson to choose their own path. Grayson, 35, also intended to be the first woman to ever fly across the ocean to Europe, hiring two men to fly her there. “The Dawn,” she said, “will awake American women to new efforts and bind closer the women of two continents.”

Elder and Grayson emerged at a unique moment in American history: air fever. In the summer of 1927, stories of daring flights filled newspapers across the country. And radio broadcasters followed the newly minted American hero Lindbergh everywhere as he flew the Spirit of St. Louis in a goodwill tour across America. Now, improbably, came two heroines—Elder and Grayson—elbowing their way into the national conversation. Reporters loved writing about their plans—and their planes. They also enjoyed belittling them every chance they got. They called Grayson “The Flying Matron.” And they doubted whether Elder was truly serious about her trans-Atlantic flight.

“What’s this you’re doing?” one reporter asked her. “Advertising a movie?”

“I would rather give my life to something big and worthwhile,” Grayson argued that fall, “than to live longer and do less.”

Both Elder and Grayson fell short in late 1927. One of them would crash en route after more than 30 hours of flying—only to be saved by a passing ship, a miracle. The other would plunge into the cold waters of the North Atlantic, never to be found again.

But Grayson was right: Even though they didn’t make it across the ocean, Elder and Grayson helped inspire a movement. At a time when many men believed a woman had no business flying—and when government officials would create hurdles such as withholding weather reports to make a hard flight even more difficult—these two female pilots proved that a bold woman could defy rules. Other women were soon following them into the sky and, within months, political pundits were declaring 1928 to be the year of the woman.