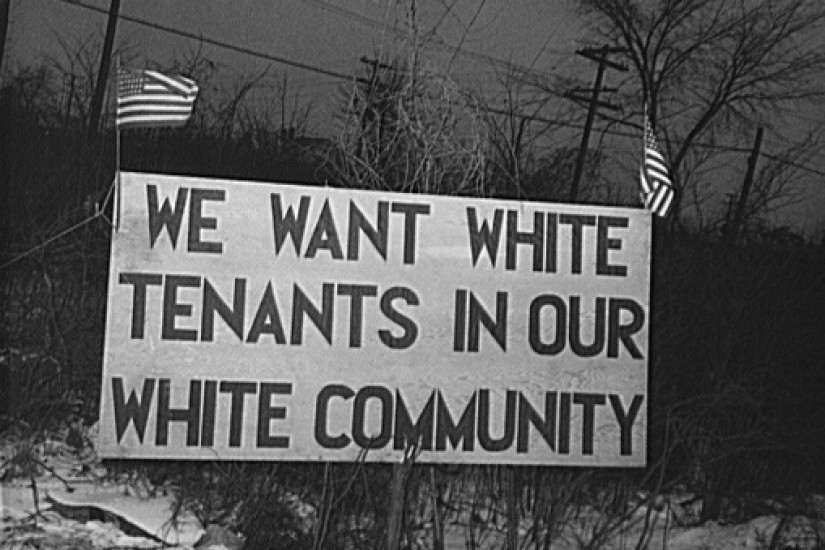 A sign protesting a decision to allow African-American residents in the Sojourner Truth Homes, a public housing complex in Detroit, Michigan, 1942.
Arthur Siegel/Library of Congress
…

Rothstein wrote The Color of Law for an audience of five: Chief Justice John Roberts and his conservative colleagues on the Supreme Court. He “adopt[s] the narrow legal theory of Chief Justice Roberts, his colleagues, and his predecessors. They agree that there is a constitutional obligation to remedy the effects of government-sponsored segregation, though not of private discrimination.” Rothstein argues that, in fact, most segregation falls “into the category of open and explicit government-sponsored segregation.”

While likely not his intention, the result is a successful showing of why progressive government, replicated by New Deal acolytes at the local level, often empowered politicians, federal agencies, and local planners to implement their racial biases against African-Americans. The Color of Law is a story about how, when allowed, authorities will pick economic winners and losers to their own benefit rather than the benefit of the country as a whole, especially if it helps them win votes.

The Color of Law does a magnificent job explaining how much the American Dream, although commonly imagined as building the next Apple or Facebook in a garage, has relied on the multigenerational growth of wealth—homesteaders owning and developing land to pass on to the next generation, immigrants working in factories to allow their children to go to college. But from racialized public housing and zoning, the enforcement of discriminatory housing covenants, and the overt denial of government-backed financing for black Americans, to sanctioning private mobs to drive African-Americans out of middle-class neighborhoods, government intervention kept many from partaking in this generational prosperity. While white families accrued wealth as housing prices grew from the 1950s onward, many black Americans fell further behind. Rothstein magnifies how the “cycle of poverty,” “disintegration of the family,” and other bywords used to describe black impoverishment can be directly attributed to government decisions—or government failure to enforce basic rights, in the case of violence against new black arrivals in white neighborhoods.