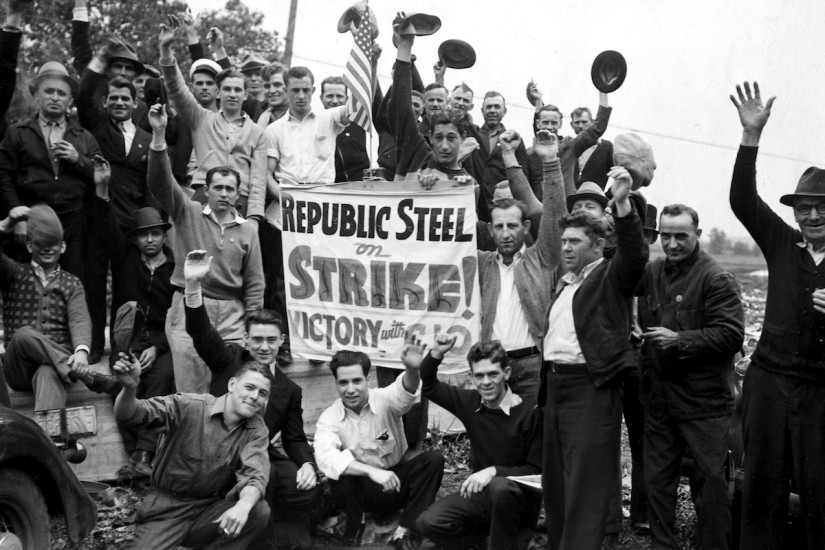 For nearly half a century, an air of inevitability has clung to the decline of the American labor movement. As union density has fallen to near 10 percent and strike activity has reached historic lows, labor has often fumbled in its response to political attacks. Since 2012, five states have passed anti-union “right-to-work” laws, after campaigns funded lavishly by right-wing billionaires. In June, the Supreme Court dealt another blow, ruling in Janus v. American Federation of State, County, and Municipal Employees that public employees cannot be required to pay fees to a union. With this decision, public-sector unions are now set to go the way of the once-great industrial unions—institutions that underwrote the creation of middle-class wealth and crystallized a still-powerful image of American prosperity.

In the rearview mirror, the three decades after World War II, when the expanded labor rights regime of the New Deal was at its strongest, increasingly look like what the historian Jefferson Cowie has called a “great exception.” For most of American history, politicians and courts have given employers nearly unrestricted control over the terms of work, and they have offered the resources of the state—above all, the military and police—to enforce those terms. And even when laws regulating the length of the working day and establishing safety requirements were passed, courts frequently overturned them. Workers’ failure to make much headway by the early twentieth century led scholars, beginning with the German sociologist Werner Sombart, to argue that the United States was just different from Europe: It lacked a class-bound medieval past, it had an individualistic ethos, and its workers were too diverse to organize effectively.

This way of seeing American labor is undermined, however, by the historical record: There was, in fact, a militant labor movement in the United States, one that sometimes even worked with vibrant socialist and communist parties. While professional and racial differences split some groups, others overcame those divisions and collectively faced down violent repression from their employers, state governments, and even the general public. Striking workers at the Rockefeller-owned Colorado Fuel and Iron Company in 1914 met with machine guns, fired into their encampment by a private strike-breaking firm and the National Guard; two years earlier, textile workers in Lawrence, Massachusetts, had contended not only with state and private security forces, but also with Harvard students who were released from their exams to fight the strike.

Recalling these stories today is important, Erik Loomis argues in A History of America in Ten Strikes, because even though the workplace is still a “site where people struggle for power,” the memory of workers who fought for basic rights has largely disappeared, he observes, “from our collective sense of ourselves.” Every leap forward in American labor history—from safety regulations to the eight-hour day—has been achieved by mass mobilization of workers. But if at least some, and often many, Americans have always been ready to take militant action for a better life, why have their successes proved so limited and fragile?