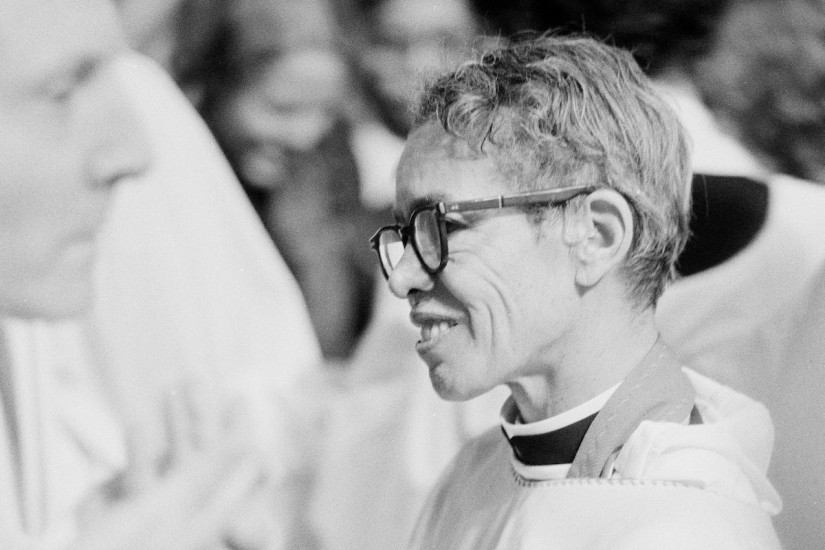 Rev. Pauli Murray is ordained at the Washington Cathedral in 1977, becoming the first black woman ordained as a priest of the Episcopal Church.
AP Photo

As she grew older, the oppressive power of segregation’s repetitive humiliations created in Murray what she described as “a lurking fear.” But she also found herself increasingly unable to endure its indignities. By the 1930s, the forces of economic depression and the rise of fascism abroad were “breeding a new militancy in younger Negroes like me,” Murray noted, and strengthening hopes and demands for change. In these circumstances, the rejection of her application to the University of North Carolina for graduate study in sociology seemed to her intolerable. “We of the younger generation,” she wrote to UNC president Frank Graham, “cannot compromise with our ideals of human equality.” Murray unsuccessfully appealed to the NAACP to take her case as part of the systematic attack it was beginning to mount on the doctrine of “separate but equal.” But her application had garnered so much public attention that she now found herself connected to a burgeoning movement. Her refusal to accept the injustice of her rejection by UNC had made her “part of a tradition of continuous struggle.” It was “exhilarating.” To speak out at last brought “the liberation of my mind from years of enslavement.”

The act of protest that led to her jailing in Virginia was not one Murray had planned in advance. She was riding a bus home to Durham for Easter when the driver demanded that she and the friend accompanying her sit in broken seats in the colored section rather than in one of the many seats available toward the front. She objected. Murray had been reading about Gandhi and nonviolence and endeavored to adhere to those principles as she resisted unequal treatment and was taken to jail. The case attracted considerable attention, including from the highest levels of the NAACP.

Murray remained uncertain whether writing or law would enable her to fight Jim Crow more effectively. Worries about earning a living, however, led her to put aside thoughts of a writing program at the University of Iowa, and in 1941 she entered Howard Law School. She excelled as she acquired the legal tools for combating segregation. But in Howard’s overwhelmingly male environment, she was faced with another corrosive form of discrimination. It was at Howard, she wrote, “where I first became conscious of the twin evil of discriminatory sex bias, which I quickly labeled Jane Crow.” Gender inequity compounded racial injustice, deepening Murray’s sense of isolation and marginalization.

During her years in law school, Murray grew convinced that a more direct approach should replace the NAACP strategy of challenging segregation within the separate but equal terms established by Plessy v. Ferguson in 1896. Separate, she believed, was inherently and necessarily unequal. The Thirteenth ...