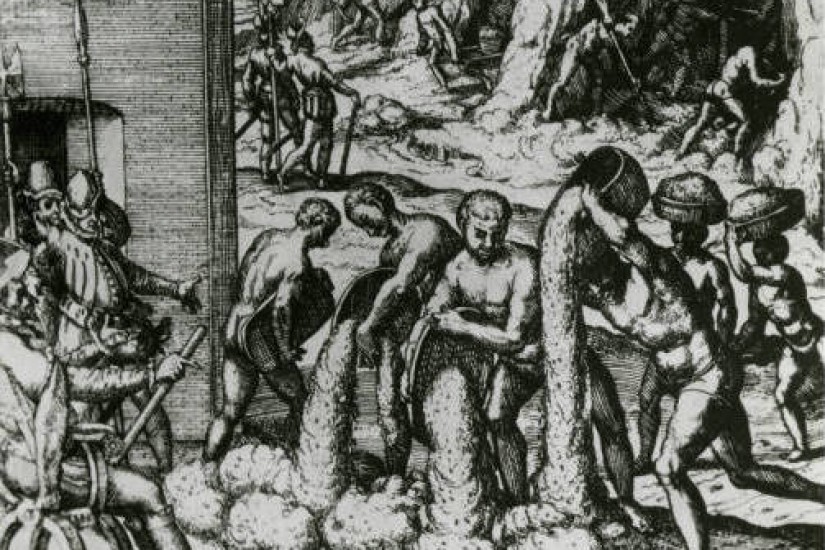 Drawing in which the Taíno Indians are working the mines under Spanish supervision.
University of Miami Library
…

In short order, Columbus established the first American colony at La Isabela, on the north coast of Hispaniola, in 1494. After a brief period of coexistence, relations between the newcomers and natives deteriorated. Spaniards removed men from villages to work in gold mines and colonial plantations. This kept the Taíno from planting the crops that had fed them for centuries. They began to starve; many thousands fell prey to smallpox, measles and other European diseases for which they had no immunity; some committed suicide to avoid subjugation; hundreds fell in fighting with the Spaniards, while untold numbers fled to remote regions beyond colonial control. In time, many Taíno women married conquistadors, combining the genes of the New World and Old World to create a new mestizo population, which took on Creole characteristics with the arrival of African slaves in the 16th century. By 1514, barely two decades after first contact, an official survey showed that 40 percent of Spanish men had taken Indian wives. The unofficial number is undoubtedly higher.

“Very few Indians were left after 50 years,” said Ricardo Alegría, a Puerto Rican historian and anthropologist I interviewed before his death this past July. He had combed through Spanish archives to track the eclipse of the Taíno. “Their culture was interrupted by disease, marriage with Spanish and Africans, and so forth, but the main reason the Indians were exterminated as a group was sickness,” he told me. He ran through the figures from his native island: “By 1519, a third of the aboriginal population had died because of smallpox. You find documents very soon after that, in the 1530s, in which the question came from Spain to the governor. ‘How many Indians are there? Who are the chiefs?’ The answer was none. They are gone.” Alegría paused before adding: “Some remained probably...but it was not that many.”

Possibly as many as three million souls—some 85 percent of the Taíno population—had vanished by the early 1500s, according to a controversial extrapolation from Spanish records. As the Indian population faded, so did Taíno as a living language. The Indians’ reliance on beneficent icons known as cemís gave way to Christianity, as did their hal­lucinogen-induced cohoba ceremonies, which were thought to put shamans in touch with the spirit world. Their regional chieftaincies, each headed by a leader known as a cacique, crumbled away. Their well-maintained ball courts reverted to bush.

Given the dramatic collapse of the indigenous society, and the emergence of a population blending Spanish, Indian and African attributes, one might be tempted to declare the Taíno extinct. Yet five centuries after the Indians’ fateful meeting with Columbus, elements of their culture endure—in the genetic heritage of modern Antilleans, in the persistence of Taíno words and in isolated communities where people carry on traditional methods of architecture, farming, fishing and healing.