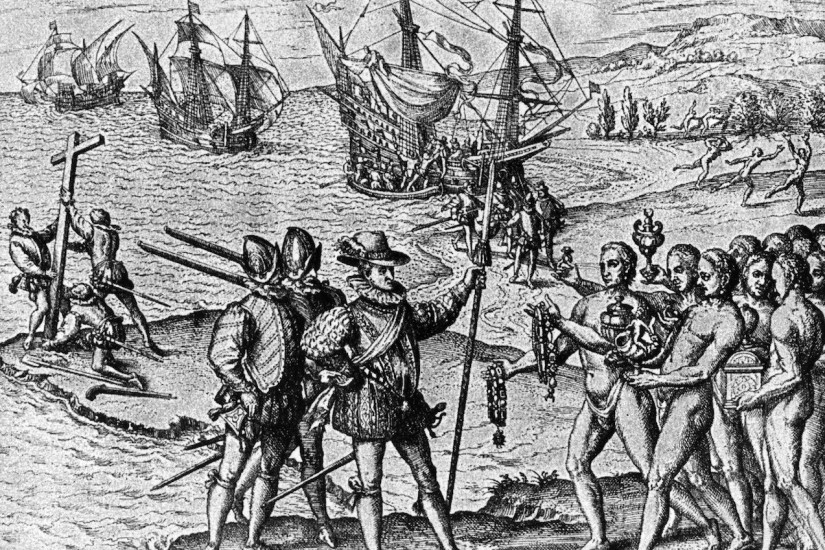 Christopher Columbus lands on Watling Island and meets the natives, while three of his shipmates erect a cross (1492)
Hulton Archive/Getty Images

Today, October 12, is Columbus Day. Every year it’s officially the second Monday in October; this year it falls on the exact anniversary of the Niña, Pinta and Santa María’s arrival in the Bahamas 523 years ago.

So to mark today, I’ve made a list. I’m sure to almost all Americans it would seem like a meaningless jumble of things with no connection to each other. But in fact it tells one story, the story of why October 12, 1492, is the most important date in human history — and demonstrates that you have to understand that in order for anything happening on Earth now to make sense:

Columbus’ landfall in the Western Hemisphere was the opening of Europe’s conquest of essentially all of this planet. By 1914, 422 years later, European powers and the U.S. controlled 85 percent of the world’s land mass.

White people didn’t accomplish this by asking politely. As conservative Harvard political scientist Samuel Huntington put it in 1996, “The West won the world not by the superiority of its ideas or values or religion … but rather by its superiority in applying organized violence. Westerners often forget this fact; non-Westerners never do.”

In fact, European colonialism involved a level of brutality comparable in every way to that of 20th-century fascism and communism, and it started with Columbus himself. Estimates of the number of people living on the island of Hispaniola when Columbus established settlements range from 250,000 to several million. Within 30 years of his arrival, 80 to 90 percent of them were dead due to disease, war and enslavement, in what another Harvard professor cheerily called “complete genocide.” Contemporary accounts of the Spaniards’ berserk cruelty really have to be read to be believed.

Formally, of course, European colonialism largely ended in the 1940s, ’50s and ’60s. Yet informally, it has — behind the mask of what Pope Francis recently called “new forms of colonialism” — continued with surprising success.

Thus European colonialism is the central fact of politics on earth. And precisely because of that, it is almost never part of any American discussion of politics. Anthropologists call this phenomenon “social silence” — meaning that in most human societies, the subjects that are core to how the societies function are exactly the ones that are never mentioned.

If we maintain the social silence around colonialism, our past and present will always be bewildering, like the above list. But if we break the silence, and talk about what truly matters, the confusing swirl of war and conflict can suddenly makes sense.