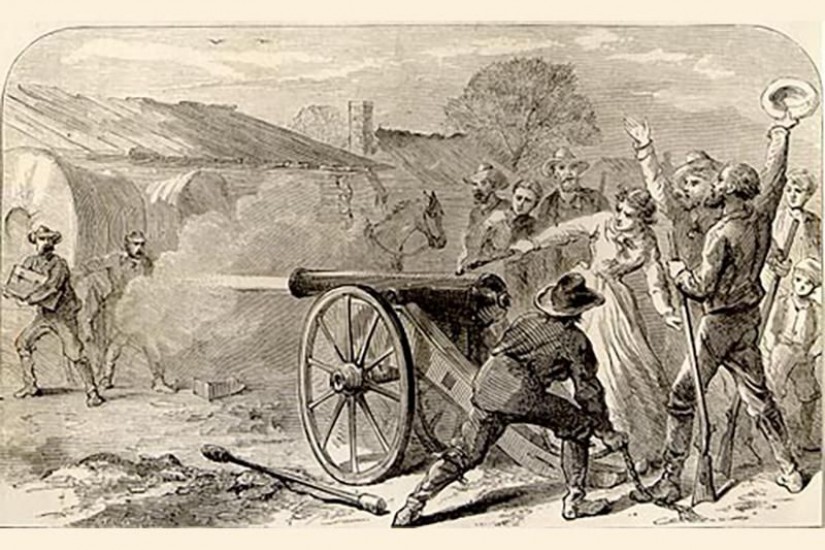 Angelina Eberley fires off the cannon at the agents attempting to move the archives from her hometown of Austin.
Texas State Library and Archives Commission
…

Houston (the man) ascended to the presidency a second time in 1841, inheriting Austin as the capital, and he made no bones about how much he hated the city, often calling it “the most unfortunate site on earth for a seat of government,” and refusing to move in to the official residence, preferring instead to take a room at a boarding house.

Having won three-quarters of the vote, Houston felt empowered to move the capital back to his namesake city. He agitated for such a change with the legislature, but representatives defeated his proposals. Austinites had hometown pride, but their obstinacy went beyond that. Losing the capital would stunt the growth of their rapidly developing city, and result in a drop in property values. Sam Houston was, in their minds, abandoning the seat of government and exaggerating the seriousness of the Mexican threat to achieve his political aims.

In early March of 1842, 700 Mexican troops under General Rafael Vasquez crossed the Republic of Texas borders, and by March 5 occupied San Antonio, about 80 miles from Austin. Officials declared martial law; many families left for somewhere safer.

In the aftermath of the attack, Houston feared the worst in what was to come. Letters to his fiancée express true concern of not only Mexican attack, but that Comanches would burn and destroy the city – and crucially its archives - as well. Houston felt strongly that Austin was not a safe place for the republic’s capital.


“The destruction of the national archives would entail irremediable injury upon the whole people of Texas…Should the infinite evil which the loss of the national archives would occasion, fall upon the country through his [the President’s] neglect of imperious constitutional duty, he would be culpable in the extreme, and must justly incur the reproach of a whole nation.”

A couple of weeks earlier, President Houston had ordered his Secretary of War, George W. Hockley, to move the archives out of Austin to Houston, and Thomas “Peg Leg” Ward, the new commissioner of the General Land Office (which dealt with public lands and patents and maintained government records), was told to prepare the archives for transport.

The military commander in Austin, Colonel Henry Jones, had other plans.