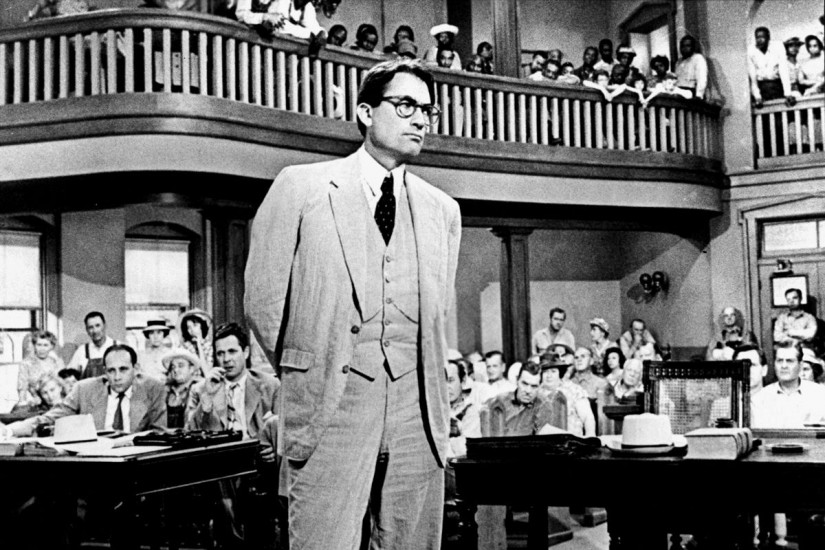 Gregory Peck as Atticus Finch in the 1962 film version of Harper Lee's "To Kill a Mockingbird" (1962).
Universal Pictures/Wikimedia Commons
…

Why did you decide to write about a character from To Kill a Mockingbird—a novel that, in various ways, has already been dissected over and over again?

I'm fascinated by the fact that this book, which came out in 1960 and was made into a movie in 1962, has played such an enduring role in American political culture, that it's become a kind of primer for young students on racial morality. It's one of the first quote-unquote adult books we teach to children. But despite the book's popularity, it was hard to write about it—and Atticus—because there was only the one book. Lee said little about it, so we had little to go on.

That changed in the summer of 2015, when Go Set a Watchman, which Lee wrote before To Kill a Mockingbird, was published and portrayed a different Atticus. A great many people who'd named their children after this character were up in arms about what to do about the fact that the Atticus of this book is a racist reactionary—the exact kind you might think that a 70-year-old arthritic white man in Alabama would've been in the early years of the civil rights movement. So, that set me off to think more about the evolution of Atticus, and the first thing I did was learn more about Lee's father, A.C. Lee. One of the few things she said on the record in the '60s, when she was still talking publicly, was that her father was the inspiration for Atticus. As a result, I ended up writing this kind of odd book, which is a biography of a fictional character.

Did your historical exploration reveal anything especially interesting?

Absolutely. Audiences knew that, like Atticus, Lee's father was a small town-lawyer and a state legislator. But unlike Atticus, he was also the co-owner and editor of The Monroe Journal, a small newspaper in Monroeville, Alabama. I looked at the newspapers, and they were a gold mine—because not only did A.C. Lee have an editorial page, he had an active and ambitious editorial page. He wrote about state politics, the evolution of the New Deal, the rise of fascism in Europe in the '30s, the need for American intervention. He covered a remarkable array of things, bringing the world to his small-town readers in southwest Alabama.