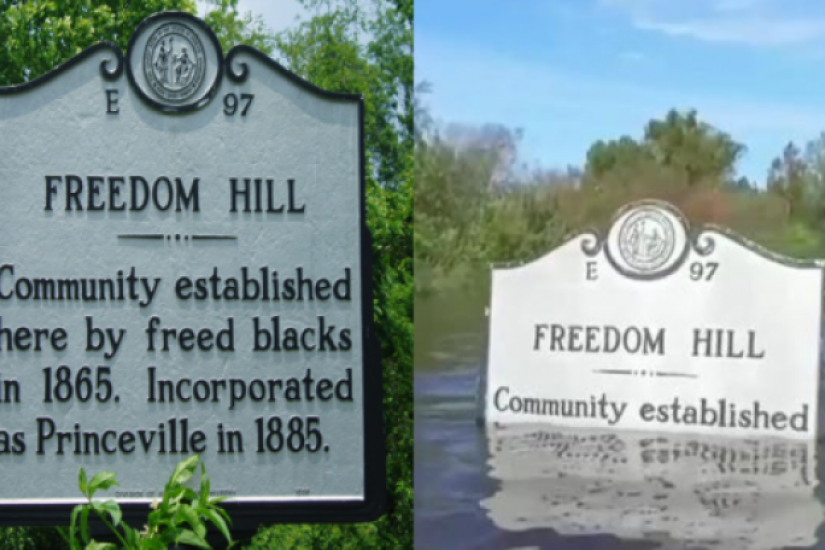 Princeville, NC was originally founded as Freedom Hill in 1865. It has been destroyed by flooding nine times since 1800.
North Carolina Dept. of Natural and Cultural Resources/Scalawag
…

Princeville was founded in 1885 by groups of newly-freed Black people, who by choice or coercion remained in the South. The town’s existence was in the interest of Black people seeking a place of their own, to build their own churches, schools, and political institutions. The town was also in the interest of White planters in the neighboring town of Tarboro, who were trying to maintain a pool of segregated Black labor for sharecropping and the growing industrial economy. The planters had little interest, of course, in Black independence and a strong local Black polity. With total control of available land in the area, the planters of Tarboro sold the land that became Princeville, a vast floodplain just across the Tar River.

Unfortunately, but not surprisingly, Black places like Princeville are likely to be sites of multiple, intersecting environmental justice struggles. Anyone paying attention in North Carolina knows Princeville is well known for its persistent vulnerability to catastrophic flooding. In fact, anyone who knows anything about Black towns or the Black side of town—from Princeville to the Lower Ninth Ward of New Orleans—knows that the creek often rises in their backyards.

Three weeks ago, Hurricane Florence, like hurricanes Matthew (2016) and Floyd (1999) before her, slammed into eastern North Carolina. She tore through stilted beach houses, collapsing roads, and inundating entire towns. She sent rivers of memories floating beside house debris, cars, and thousands of industry manufactured hogs and chickens, along with their waste, set  loose from giant putrid lagoons.

The headlines from the Rocky Mount Telegram to the Anchorage Daily News reflected fears that the worst would happen to Princeville for the third time in 19 years. Residents who rebuilt twice, determined to hold fast to the freedom dreams of the independent Black town, said they would cut their losses if Florence repeated the devastation. And so they waited. And I googled. And after Florence pivoted southwest, sparing the town from the worst of her initial wrath, they waited again for the Tar River to crest from all the rain she left behind, to see if the water would spare them a second time. It did, thankfully. And then the media moved on. Nothing to see here, until the next storm comes, which could be as soon as this week.