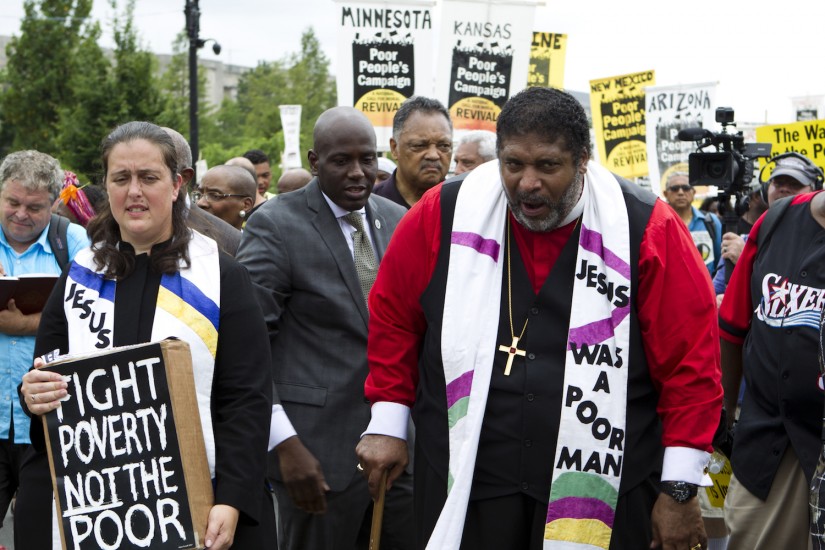 The revitalization of religious left activism has been in the news a lot lately. Last year, Reuters, Bloomberg, and The Washington Post reported on the religious left as a resurgent political movement. Last June, The New York Times featured front-page coverage on the phenomenon, explaining, “After 40 years in which the Christian right has dominated the influence of organized religion on American politics … left-leaning faith leaders are hungry to break the right’s grip on setting the nation’s moral agenda.”

The man at the center of the movement, and the leader whom these stories all reference, is the Rev. William J. Barber II, an African American minister from North Carolina who has been called the Martin Luther King Jr. of our time. Like King, Barber and his fellow activists have demanded racial justice, voting rights, peace, and a national solution to poverty. The problem is that Barber rejects the label of “religious left” most media stories attach to him. In fact, he disdains all terms of division, save for moral right and moral wrong. According to the Times, at a rally in Raleigh, Barber told his audience: “If you think this is just a left-versus-right movement, you’re missing the point. This is about the moral center. This is about our humanity.”

Barber’s mission is also about reasserting the “moral center” of the social gospel, an American religious tradition that began at the turn of the twentieth century when urban industrial problems prompted them to take seriously Jesus’ mandate to feed the poor, care for the sick, and side with the oppressed. “Without strong voices from the social gospel movement,” Barber contended in a Think Progress op-ed, there may not have been a New Deal or a civil rights movement. Since the late nineteenth century, the term “social gospel” has been associated with liberal theology and the belief that humans could cultivate the Kingdom of God on earth by addressing the social and economic inequality that undermined God’s will. While some social gospelers were leftists, and even socialists, most identified as liberals or progressives in an era of Progressive politics. According to many histories of the topic, these social gospelers were white, at least until the Rev. Martin Luther King Jr. and his fellow civil rights activists revived the social gospel movement in the 1950s and 1960s after a four-decades-long slump.

Gary Dorrien’s new book tells a slightly different story. In Breaking White Supremacy: Martin Luther King Jr. and the Black Social Gospel, Dorrien gives due credit to a host of African American activists in the 1920s through the 1950s, who carried the social gospel forward during a time when most deemed it dead. An Episcopal priest, Dorrien is a professor at Columbia and Union Theological Seminary; the latter also houses Barber’s Poor People’s Campaign—a renewal of King’s last project.