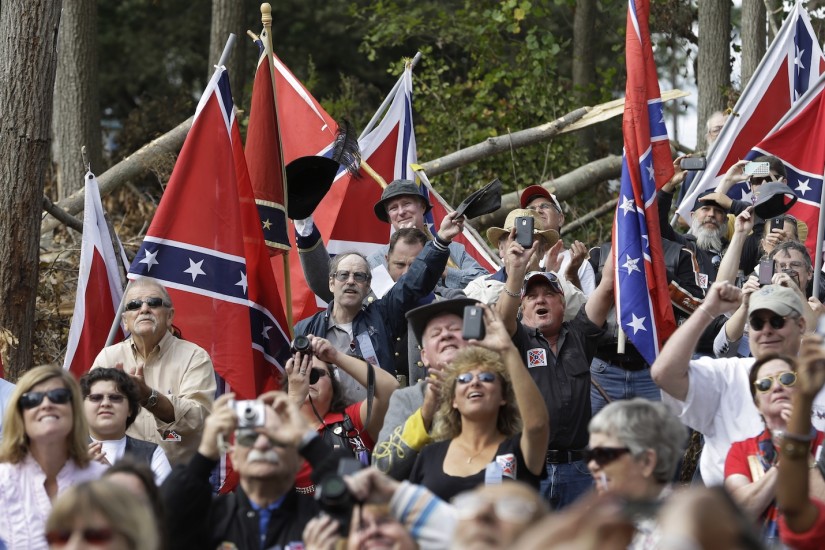 The Virginia Flaggers and Confederate re-enactors cheer the raising of a Confederate battle flag on a pole near Interstate 95 in Chester, Virginia. (September 28, 2013)
Steve Helber/Associated Press
…

In some respects, recent forecasts of a second civil war echo American prophecies that spread across the nation in the 1850s. In both eras, warnings and threats of a looming conflict made headlines, emboldened radicals and worried millions of citizens. Both societies sensed the tempo of events quickening and questioned where it would end. Waves of immigrants and refugees challenged the inclusiveness of both cultures. Recent inventions — telegraphs then, smartphones now — promised more intelligence than they delivered. Emotional partisanship poisoned politics, and factions of wealthy Americans exploited the situation to defend hidebound economic interests.

But a sea of historical experience separates our time (and our view of time) from their own. The Civil War came at a moment when Americans felt control over an open, limitless future that God destined for them. Northern and Southern radicals embraced that optimism, confident that they could harness the war to achieve their ends. Enslaved millions considered America’s violent abolition an answer to their prayers. The heady optimists of the Civil War in the North and South raced toward Armageddon.

In contrast, our modern crisis is shaped by Americans feeling blindsided by unseen forces and questioning their power to direct the future according to plan. The firebrands of today who hope to stoke the passions of a divided nation encounter a society that is less confident about its future. Antebellum Americans looked forward to warfare as a catalyst for civilization, progress and salvation. After Vietnam, Iraq and Afghanistan, Americans doubt that warfare follows predictable, controllable paths and recognize how major conflicts create more problems than they solve.

The cultural temperaments of then and now provide stark contrasts. We spend billions of dollars on dystopian blockbusters; they spent their lives in utopian communes. Our millennium threatens human extinction from climate change; theirs promised human salvation from the Second Coming. The 21st-century’s approach to tomorrow may seem gloomy, but it has its advantages. Instead of inducing apathy or despair, envisioning a perilous future has raised awareness, sobered citizens and increased collective resolve to change things before it is too late. Our future is different from Civil War America because we imagine it differently.