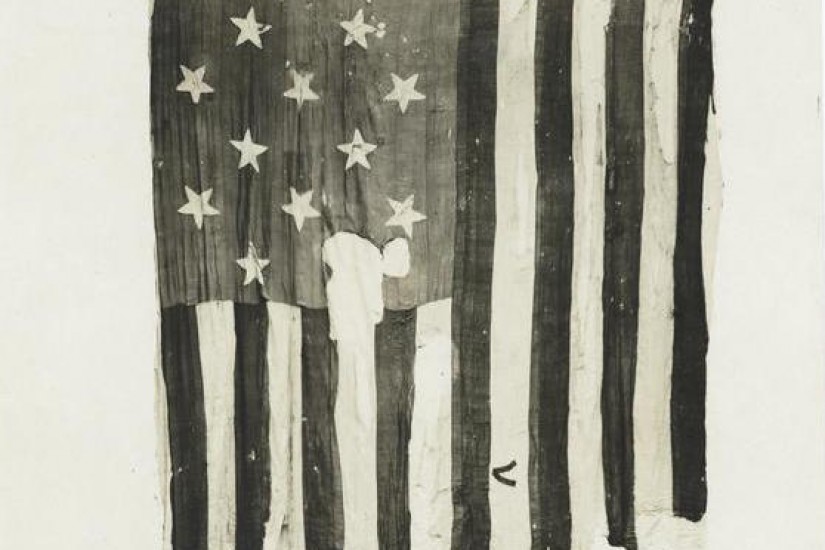 The flag that flew over Fort McHenry when American troops were under attack by the British in 1814, inspiring Francis Scott Key to compose the hymn that became the national anthem.
New York Public Library
…

For Lepore, history is essentially a writing problem: how we know what we know (or think we do), how different forms and genres transmit different kinds of signals, what it might mean to encounter a gap between the evidence and the truth. Her work has confronted the tension between what a reader needs to know for a story to work and the limits of what can be known, and what makes the difference between a person and a character. When she wrote a historical novel, set in colonial Boston and employing the dialect of the time, her co-author called it “a different way of knowing and telling the past.” After publication, they began receiving etymology queries from the Oxford English Dictionary.

Lepore has called history “the anti-novel” and “the novel’s twin.” Both history and the novel took the forms we recognize today over roughly the same period, emerging as ways of making sense of the world during a time of great changes, and over the past two centuries or so they have followed parallel paths. Between them was often the boundary of the self: history happens out in the world, growing out of inquiries into its documents, registers, and other records, while novels present an experience of it.

Yet, for a long time, histories explained the world largely through the public lives of extraordinary men, leaving the private and the ordinary—and, of course, the lives of everyone else—to other modes of storytelling, when those stories were told at all. The social histories, women’s histories, cultural histories, labor histories, and microhistories of recent decades have found ways of thinking historically that more closely resemble a report on experience, even as, with their colliding perspectives, they’ve left large questions about what kind of “integrated” history—what kind of integrated country—could possibly follow.

Lepore is the rare historian who writes with a caution that most major events proceed in their time as halting, confused, contingent, and ultimately reliant on an uncomfortable amount of chance, despite how their stories are later told. These Truths comes at a time when many readers will have a nagging sense of living through a historical moment themselves, whatever that means (the details somehow “organic to the period” yet still lost to us). It also arrives as the raw materials of history seem to be losing their hold. “The era of the fact,” Lepore wrote in The New Yorker two years ago, “is coming to an end.”