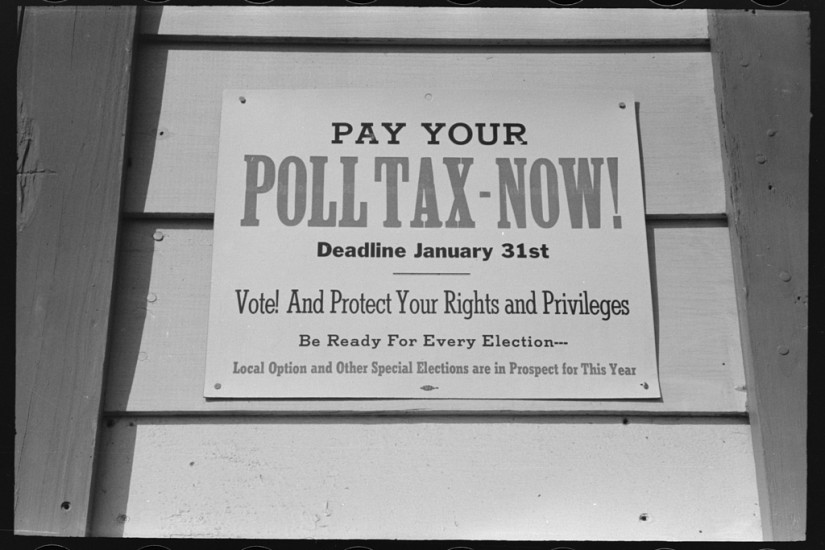 A poll tax advisory in Mineola, Texas, 1939.
Library of Congress
…

The great value of Lichtman’s book is the way it puts today’s right-wing voter suppression efforts in their historical setting. He identifies the current push as the third crackdown on African-American voting rights in our history.

The first came in the early days of the republic. In some state constitutions that dated to independence, Lichtman notes, some blacks, usually those few who met certain property qualifications, were granted suffrage. But protests were often immediate when they did vote. In 1803 in Wallingford, Connecticut, losers of a local election complained that “a Negro fellow by the name of Toby” had been allowed to vote for the winners. This affront was compounded, they alleged, because this “Black night walker” had once attempted to rape a white woman. By 1814, the state legally limited the franchise to whites.

And so it went. In Maryland, the original state constitution of 1776 actually allowed property-owning African-Americans to vote. Then their numbers increased, and by 1802, the legislature banned them from voting. New Jersey followed a similar arc, allowing blacks to vote under its original constitution but ending the practice in 1807. In New York, some blacks could vote under the 1777 constitution. A rewriting in 1821 stopped just short of explicitly limiting the vote to whites, but it imposed a property qualification “which we know they cannot comply with,” as one delegate put it.

The second crackdown came after Reconstruction, which ended in 1877. During Reconstruction, blacks in the South gained full citizenship rights, which were enforced by occupying Union soldiers. But even then, the national will to safeguard those rights was scant. In 1875 President Ulysses Grant and some of his fellow Republicans—the good guys, at that time—sought to pass a bill to “redeem” the words of the Fifteenth Amendment, which granted the franchise to persons previously held as slaves, by legislating meaningful enforcement provisions. Joseph Gurney Cannon, a leading Republican congressman of the day for whom one of the three House office buildings along Independence Avenue is named, argued, “Will we protect these men [African-Americans] or will we leave them to be overborne and butchered?” The House passed the bill, but the Senate didn’t act on it. Even in Lincoln’s party, opinion was divided on how far they were willing to go to protect and defend black people’s rights.

Once the Union troops left the South, African-Americans’ rights were stripped by means both legal and violent. The violent means—the rise of the Ku Klux Klan—everyone knows about. Somewhat less well known are the legal efforts—the state constitutions passed by southern states that explicitly enshrined white supremacism in law. “There is no use to equivocate or lie about the matter,” said the Mississippian James Vardaman of that state’s 1890 constitution. “Mississippi’s constitutional convention of 1890 was held for no other purpose than to eliminate the nigger from politics.”