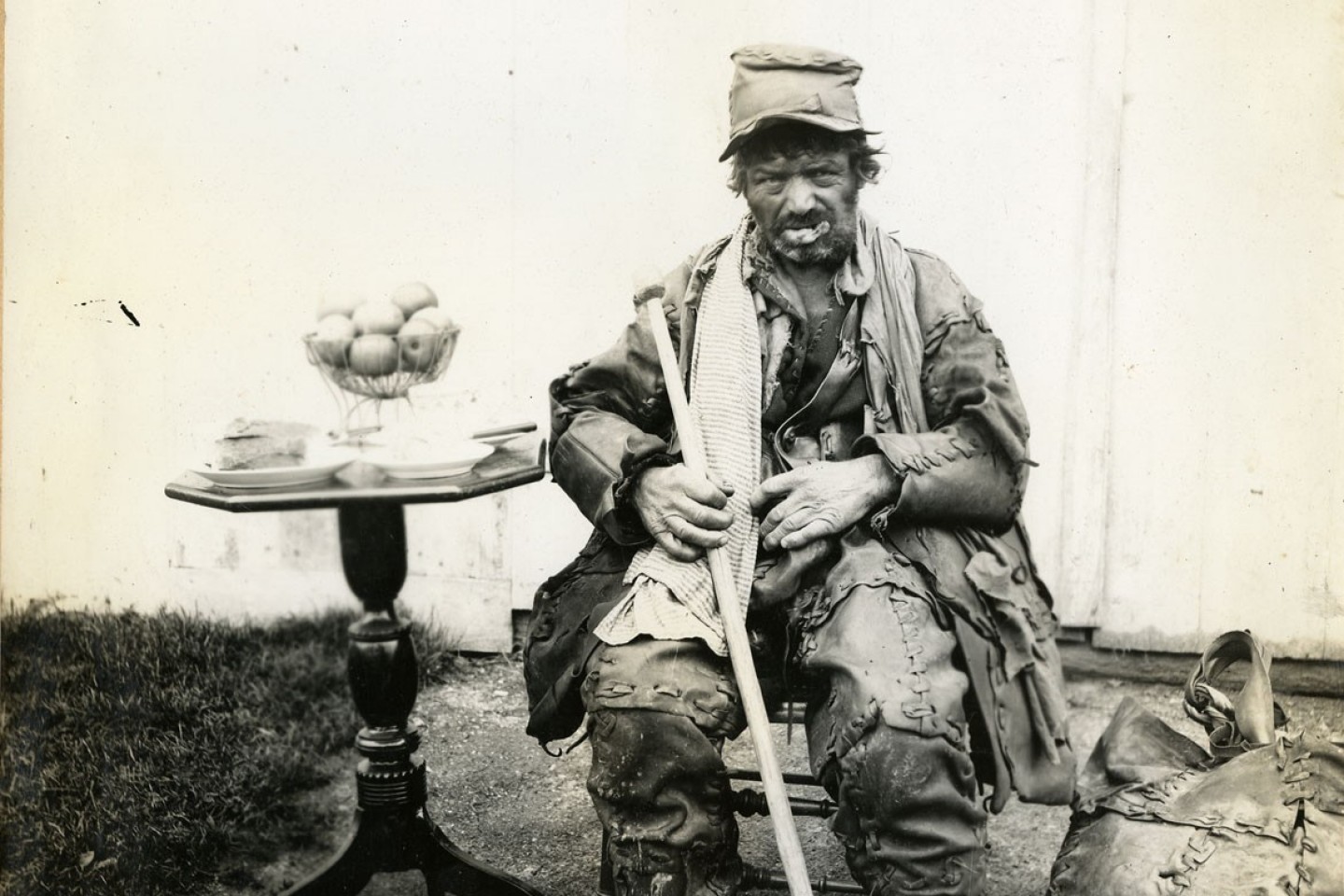 One of only 20 known photos of "the Leatherman," a legendary 19th century vagabond in the Hudson River Valley. He is commemorated on a Legends & Lore sign in Ossining's Sparta Cemetery.
Westchester Historical Society

One day in the early 19th century, a woman was killed with a silver bullet shot through her kitchen window in Esperance, New York. In some versions of the tale, she had made local cattle disappear, caused crops to fail, and was able to walk on water. In others, she was a French woman, widowed by a Napoleonic Wars soldier and unable to speak English. She was shunned, called a witch, and eventually, the local people voted on her murder. They buried her upside down, with a stake in her head. An evergreen tree was planted to mark the grave. Or so the story goes.

It’s dark lore for a town whose name means “hope" in French. Yet a year ago this week, on New York’s Route 20, the Esperance Historical Society dedicated a sign to the "Esperance Witch." It was the latest addition to the roster of Legends and Lore Markers, meaning that the story’s murky details did not get in the way of official commemoration.

Since 2015, the Legends and Lore Marker Grant Program has funded over 35 roadside signs commemorating New York folklore. A partnership between the William G. Pomeroy Foundation and the New York Folklore Society, the program offers grants to municipalities and nonprofits to document folklore in their communities. Red and tan markers — very similar in shape and style to the blue and yellow state historical signs that were mostly erected in the 1920s and ‘30s — are adorned with a stargazing moon. Instead of describing Revolutionary War battles or famous figures’ birthplaces, the new signs offer accounts of witchcraft, spectral encounters, eccentric hermits who danced for pennies, and other unexplained phenomena. One stands outside the Goshen Courthouse, regaling visitors with the tale of Claudius Smith, a “reputed Tory marauder” hanged there in 1776. (Allegedly his skull is still in the masonry over the courthouse door.) Another, on the outskirts of Canaseraga, recounts the “hairy women” first sighted in 1926, who fled into the forest and lived there like wild creatures. Travelers along Route 29 may notice a sign for “Spook Rock,” where a “beautiful Indian maiden” and her lover from an opposing tribe rest. When church bells ring, the rock — the story goes — turns over, and the star-crossed lovers appear.

Ellen McHale, the New York Folklore Society’s executive director, believes that the Legends and Lore program can give people a valuable glimpse into the kinds of stories that had currency in previous generations. “It doesn't necessarily show up in the historical record,” she says, “but it’s really a story about the community itself, and it’s important to recognize those stories that people tell about themselves.”

In 2016, the Friends of Long Point Park put up a Legends and Lore marker to the "Phantom Indian of Conesus Lake," a hoax by a boat tour operator named Colonel S. Toohey. Between the 1920s and 1970s, Toohey earned local fame in the western edge of the Finger Lakes by offering tourists glimpses of a ghostly apparition (played by a person in costume decorated with phosphorescent paint). Another 2016 sign in Ossining’s Sparta Cemetery commemorates an 1880s figure known as "The Leatherman," who for "no known reason" walked a 365-mile loop every 34 days between New York and Connecticut dressed in 60 pounds of leather. The Town of Brookfield unveiled a marker in 2017 for the Gorton Lake Turtle. It reads “As Tom Dorsey cleared land his wagon load of huge rocks couldn't be moved by horses. A giant turtle surfaced and dragged [the] wagon into the lake.”

The stories commemorated by these signs, in many cases, offered explanations for people, and things, that seemed inexplicable. They also served as warnings. A marker at the “Thirteen Curves” near Syracuse tells drivers of a woman who still searches for her groom, both killed on their early 1900s wedding night. The ghost story is a reminder of the dangers on this serpentine road. Near Rolling Hills Asylum in Bethany, a sign describes “spirits believed to still roam,” recalling the real suffering of 19th-century mental patients.

The legends aren’t all supernatural. A sign at a Wayne County bed and breakfast relates lore of the former farmhouse’s role as a site on the Underground Railroad. A Kinderhook sign recognizes local schoolteacher Jesse Merwin as an inspiration for Washington Irving’s Ichabod Crane in "The Legend of Sleepy Hollow.” The Legends and Lore program does not require proof that these events actually transpired, only that the stories about them have some verifiable origin. “We don’t want someone that has a commercial establishment to make up a ghost,” McHale explains.

“There’s often historical truth at the heart of every legend,” says Paula Miller, executive director of the William G. Pomeroy Foundation. “The folklore and legends of each community are, of course, unique to them and their own past, but the common thread is that the stories are woven into the community’s history.”

In this sense, there is perhaps less separating the red and tan markers from the more traditional blue and yellow ones. Official markers, which emerged in the early 1900s and had a postwar boom during the heyday of the road trip, have become ubiquitous alongside American roadways. George Washington slept here; the Civil War was fought here; Mark Twain lived here. They are presented as truth, but were created by groups or individuals with their own interests in deciding which stories are — and aren’t — cast in metal. And the products of their decisions have for years played a role in forging our myths about what it means to be American.

There are also myths that take on the trappings of “history” through the very act of being memorialized. Take the numerous monuments to Christopher Columbus, which can in part be traced back to the figure being popularized by Washington Irving. (In addition to imagining headless horsemen, Irving penned a largely fictional 1828 biography of the explorer, infusing Columbus with the bravery and independent spirit that the still-young country wanted to see in itself, and perpetuating the fiction that Columbus was the first to challenge the flat-earth theory.)

The Lost Cause mythology that still shapes many people’s understanding of the Civil War is another example of myths that were reinforced by granite and cheap bronze. In the first two decades of the 20th century, with Jim Crow taking shape and the Ku Klux Klan ascendant, and then again during the Civil Rights era a half-century later, these myths took solid form across the American South as groups like the United Daughters of the Confederacy (UDC) and Sons of Confederate Veterans (SCV) installed hundreds of monuments to Confederate leaders. The timing was no accident, and assertions of white supremacy were front and center at many of the monuments’ dedication ceremonies.

Might the Legends and Lore signs help to highlight, in their own unexpected way, the ever-shifting basis of all of the history that we commemorate in our public spaces? Maybe. But they are also a lot of fun. And while there might be some concern over, say, giving the tale of a giant turtle pulling a wagon of rocks into a lake the same status as a presidential birthplace, these eccentric markers can contribute to a richer understanding of the past, and how today’s communities came to be. Recognizing oral history and folklore in our public monuments reminds us that all history is told and retold, often changing and growing in the telling.