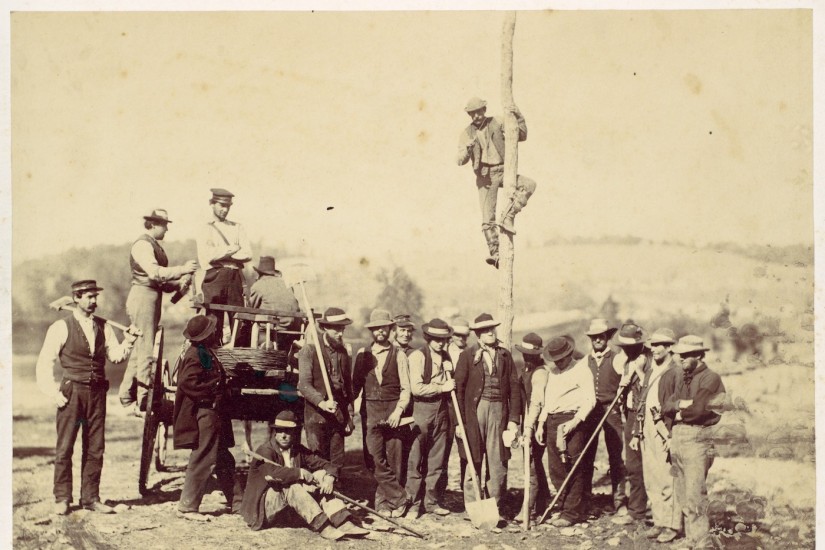 The first person to see things unfold was often a new kind of prophet—the telegraph operator. Like prophets of old, telegraph operators “saw” the future by hearing it and used a special language to read invisible signs and translate their meaning for society. The Civil War put the skills of telegraph operators in high demand. When Washington, DC, requested the best operators that the Pennsylvania Railroad could spare, Andrew Carnegie personally escorted his four best men to the capital. One of them, David Homer Bates, recalled the stress of waiting for arriving dispatches. His title, “operator,” privileged the slim fraction of time he spent tapping message on the machine. “Listener” was a more accurate description of his work. He and other operators spent endless hours straining to hear approaching news. As Quartermaster General Montgomery Meigs testified, “I have seen a telegraph operator in a tent in a malarious locality shivering with ague, lying upon his camp cot with his ear near the instrument, listening for messages which might direct or arrest movements of military armies.” Operators embodied the tortured position that the war imposed on all Americans: all they could do was wait for the war to unfold.

Civil War expectations imprisoned Bates. At the start of the war he worked at the Navy Yard near Washington, DC. Authorities placed an armed sentry outside the door to his solitary telegraph office. No one was permitted to disturb the operator. “These orders were obeyed literally, and for four days I was virtually a prisoner,” Bates recalled. The guard passed meager meals to him. Bates waited and waited. Unable to stand it any longer, on the fifth day he locked the door, opened a window, and escaped. When he returned and unlocked the door, the sentry appeared and said he would shoot Bates if he repeated the stunt.

The strain of waiting for the future to arrive took its toll on men in the telegraph office. The first superintendent of telegraph operators in the War Department, John Strouse, worked himself to death. He began the war in poor health and did not last a year. The second superintendent resigned instead of facing the same fate. The third, Major Thomas Eckert, was a titan, physically and mentally. As a young man he traveled from Ohio to New York City to see Morse’s invention in person and then built his own telegraph from memory when he returned home. At the start of the war, Eckert escaped Confederate warrants for his arrest as a spy. When a War Department clerk bought cheap iron pokers, Eckert proved their inferiority by breaking them over his flexed forearm. Only men like Eckert survived as telegraph operators.