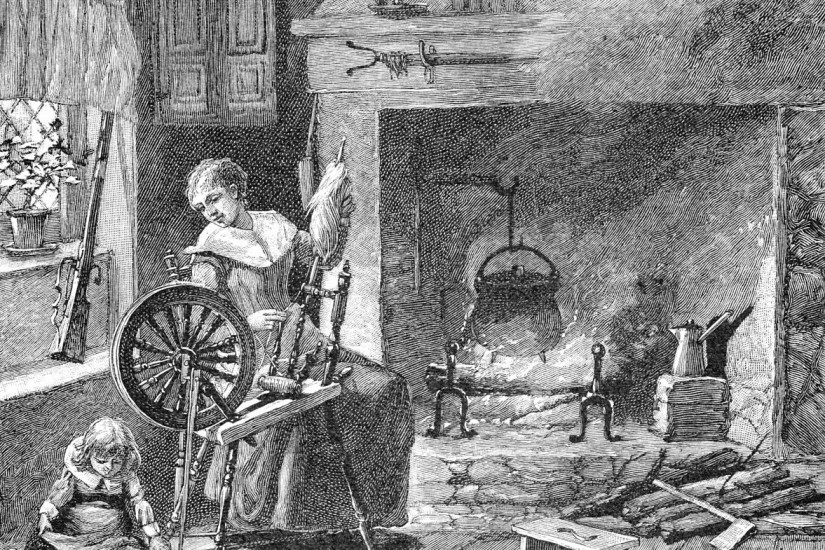 A colonial woman spinning in the kitchen.
Colonial Woman/A Brief History of the United States

I haven’t yet had the opportunity to watch the new TV series, Jamestown...But the television critic Mark Lawson has. Last week he wrote a column that criticised the show, and other recent British period drama, for featuring female characters who were, in his own words, “feisty, cheeky and rebellious.” In the name of historical accuracy, Lawson called out the makers of Jamestown for pandering to 21st-century sensibilities. Apparently, he believes women four hundred years ago raised neither hand nor voice against the patriarchy. Instead, they “willingly accept[ed] sexual and social submission.”

Fortunately, there were plenty of historians ready to respond. On Twitter, Suzannah Lipscomb offered her own research on sixteenth and seventeenth-century French women as a counterpoint to Lawson’s ahistorical assumptions. The women in Lipscomb’s archives “called each other ‘drunk’, ‘harlot’, ‘shitty whore’, ‘lice-ridden’ (pubic lice), ‘drunken whore,’” and much more besides. “One woman yell[ed] to her adulterous husband that ‘he would just as soon fuck a cow up the arse’ in 1582.” As Yvonne Seale put it in her thoughtful response, “The weight of patriarchy could crush, but it also inspired rebellions, whether small and symbolic or larger scale.”

To imagine that past women were simply and uniformly submissive is an odd, and ideologically-inflected fantasy—made even odder by Lawson’s comparison between the Jamestown women and “jihadi brides flown out to Islamic State soldiers today, or the arranged marriages that still exist in some communities.” It seems absurd “in this day and age” that educated men like Lawson need to be reminded that women have agency (even those who wed jihadis!), and that, as Rebecca Rideal writes in her Guardian response, “despite mutating societal limitations, women have always had a voice, a presence and a history that runs alongside, and often in reaction to, men.”