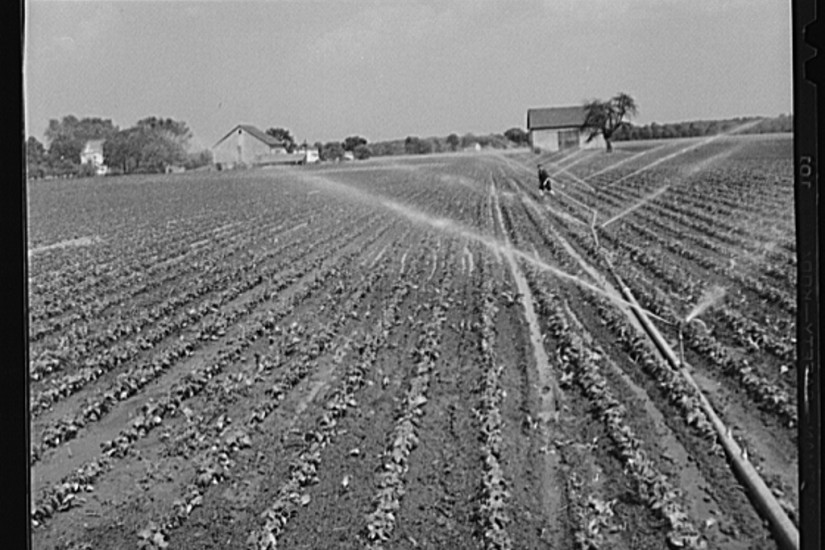 A portable irrigation unit in a bean field on Starkey Farms in Morrisville, Pennsylvania (1941).
Marion Post Wolcott/Library of Congress
…

This wave of development displaced thousands of county farmers. According to the U.S. Census Bureau there were 4,299 Bucks County farms in 1940, but only 1,159 in 1969. Herman L. Margerum, Jr., president of the Morrisville Bank, commented in 1953 that due to the new suburban growth “many old-timers have moved after selling out at good prices. Some purchased rich farmland up-county, others bought farms in Delaware and a few retired to Florida.” By 1960, farmer Harry Atkinson, Jr. complained that “There has been no land sold south of Doylestown in the last 10 years that a farmer could afford to buy and farm.”

If a farmer wanted to stay put, forgo the windfall of increased property value, and tolerate the change in the community, property taxes posed a final obstacle. Suburban development required substantial local investment in new public facilities, primarily funded by real estate taxes. When the Bucks County Board of Assessment released the results of a county-wide reassessment in 1972, farmers saw their property valued at levels two to ten times higher. Operating on the slimmest margins of profitability, they lobbied for relief. Otto Fink, a poultry farmer in Milford Township, said in reaction to his new assessment, “Either the new assessment on my farm is lowered for 1973 or I’m out of business. It’s as simple as that.” The prospect of many farmers doing the same was expressed by Walter Wurster, representative of the Bucks County Farmers’ Association, who reported “it’s not an assessment notice, it’s an eviction notice.”

Given the declining importance of agriculture in Bucks County, one would imagine that farmers faced an uphill battle to convince local authorities to help their situation. In 1970 farm operators made up less than half of one percent of the county’s total population (415,056). In 1974, the value of the county’s agricultural production was $22 million, a small fraction of the $2.7 billion in revenue produced by the county’s manufacturing firms. Only one third of the county’s land area remained agricultural use.

However, the county’s farmers found strong allies among non-farm residents, many of whom moved to Bucks because they wanted to live in a farming landscape. Additionally, there was a growing movement for environmental protection, including preserving prime agricultural soils for local food production.