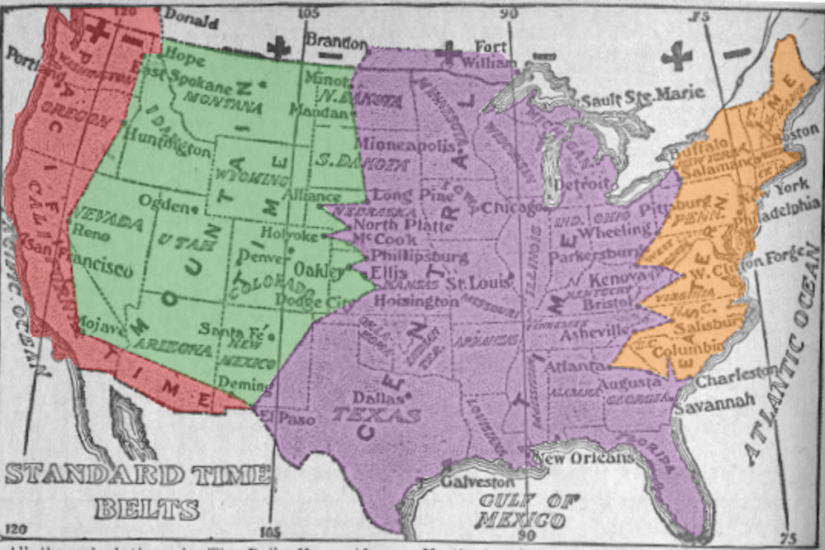 The map of Standard Time in 1913 showing temporal borders that zigzagged between cities with unclear boundaries in between.
Wikimedia Commons
…

Daylight Saving Time arrives and departs each year accompanied by obligatory articles about the headache of waking up too early, the health hazards of changing time schedules, or renewed calls to repeal it entirely. Whether championing the law or advocating for its repeal, most of these articles overlook what happened after the first daylight saving law was repealed in 1919.

By 1922, 137 cities in 16 states voluntarily followed Daylight Saving Time, but there was no pattern to the map. Even cities that were in the same time zone were increasingly following different schedules. New York and Boston had Daylight Saving Time; Philadelphia, Baltimore, and Washington D.C. did not. When it was 7PM in Philadelphia, it was also 7PM in Milwaukee, even though the two cities are separated by two states and one time zone. The city of Boise reported that because it was on the border of a time zone and the intersection of several major rail lines, its citizens followed five time schedules—none of which matched the clock on the wall at the post office.

Repealing Daylight Saving Time had only made its meaning more ambiguous. Where did time originate? Was it a schedule established by the federal government, by God, or inherent to the natural environment?