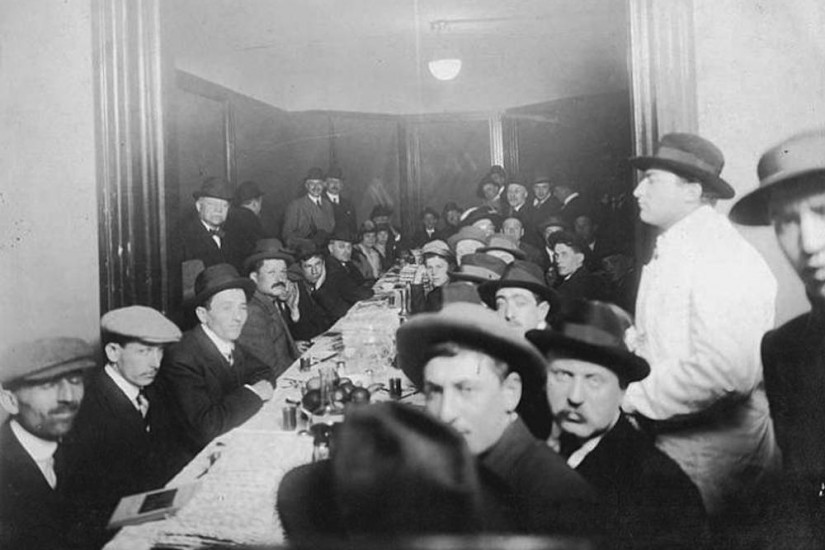 Isaac Cooper and others at a Seder in Seattle held by the Hebrew Immigrant Aid Society, 1916.
Jacobs Photo Shops/Jewish Archives Collection
…

Before Robert D. Bowers allegedly entered Pittsburgh’s Tree of Life synagogue on Saturday morning, he wrote a final post on the social-media site Gab. “HIAS likes to bring invaders in that kill our people,” he wrote. “I can’t sit by and watch my people get slaughtered. Screw your optics, I’m going in.” Then Bowers did the slaughtering himself, according to the federal criminal complaint, opening fire on congregants during Shabbat services and killing 11.

Bowers was referring, of course, to HIAS in its present-day incarnation. The group was founded in 1881 to help Jewish families who, like mine, were escaping the dangers they faced in Eastern Europe and trying to restart their lives in the United States. Today, HIAS no longer primarily provides aid to Jewish immigrants, but instead supports and advocates for the well-being of refugees of many religions and ethnicities, around the world. “Because we have helped more than 4.5 million people escape persecution,” the organization’s website states, “HIAS is uniquely qualified to address the modern refugee situation, which has mushroomed into a global humanitarian crisis.” In other words, as its current president and CEO, Mark Hetfield, has written, HIAS’s new mission is “helping refugees not because they are Jewish, but because we are Jewish.”

There’s a certain kind of twisted logic to Bowers’s horrific act. If you believe, as Bowers allegedly does, that refugees are “invaders,” and that HIAS, rooted in bedrock Jewish values, is responsible for their entry, and if you are so angry about this that you are driven to commit murder, you could target HIAS, or you could target what lies at the heart of its self-proclaimed principles: Jewishness itself, and those who practice it.

President Donald Trump didn’t see this logic: “This wicked act of mass murder is pure evil, hard to believe, and frankly, something that is unimaginable,” he said. By and large, Jews were less surprised by Saturday’s events. Even for those of us lucky enough to be born in a time and place where we have not needed to fear for our lives simply because we are Jewish, that sense of danger remains relatively recent in our collective memory. My grandfather, one of the 4.5 million people HIAS has helped, lived it.