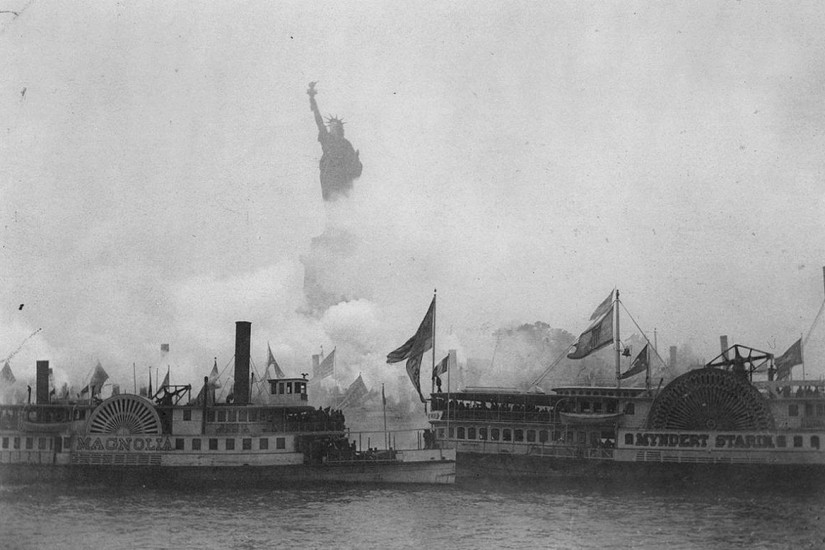 Inaugural festivities for the Statue of Liberty in New York Harbor, including a military and naval salute, October 28, 1886.
Library of Congress
…

After the military show on Madison Square, the procession continued along Fifth Avenue and on to Park Row, taking a turn to stop outside the offices of the New York World, the newspaper owned by Joseph Pulitzer, who had played such a crucial role in raising money for the pedestal. Finally the parade proceeded to Broadway and crossed to the Battery. By now the heavy rain had soaked the uniforms, the flags hanging from balconies, the colorful festoons. It all made for a rather depressing sight, with banners and elegant decorations everywhere ruined by water. At Battery Park, a crowd had been waiting for hours — spectators anxious to find a spot from which to watch the fireworks and light shows scheduled for four o’clock, or families waiting to board a ferry for Bedloe’s Island or Governor’s Island to see the ceremony up close. Boats bobbed around the docks, half shrouded in the mist. The clock had just struck one when the crack of cannon fire pierced the fog; after a moment of silence the shot was echoed by a volley of twenty or more shots. It was the salute, the feu de joie coming from the USS Gedney to signal the beginning of the naval parade on the Hudson River. The mist, however, was so thick that the ship was unable to lead the parade and fell back at least twice before something resembling a procession formed in its wake.

Around two o’clock, the fog lifted briefly and the magnificent statue was visible at last; the eyes were still covered by a French flag hanging from her crown. At Bedloe’s Island, workers had been busy since seven in the morning. Over the speakers’ stand there hung an enormous shield bearing the French Tricolor on its right and the American Stars and Stripes on its left; on the shield were inscribed the word “liberty” and an olive branch. Between the flags there was the fasces-and-axe, a symbol of magisterial power dating back to classical Rome. Thus was marked the end of the carnivalesque celebration during which the poor had been allowed to venture near the homes of the rich to affirm their sense of ownership of the statue, and women had been suffered to protest against patriarchal privileges. Now came the moment for dignitaries and diplomats to dispel the idea that the statue was a beacon of future progress and to replace this with the rival conviction that the monument was a symbol of the rule of law, of order and establishment.