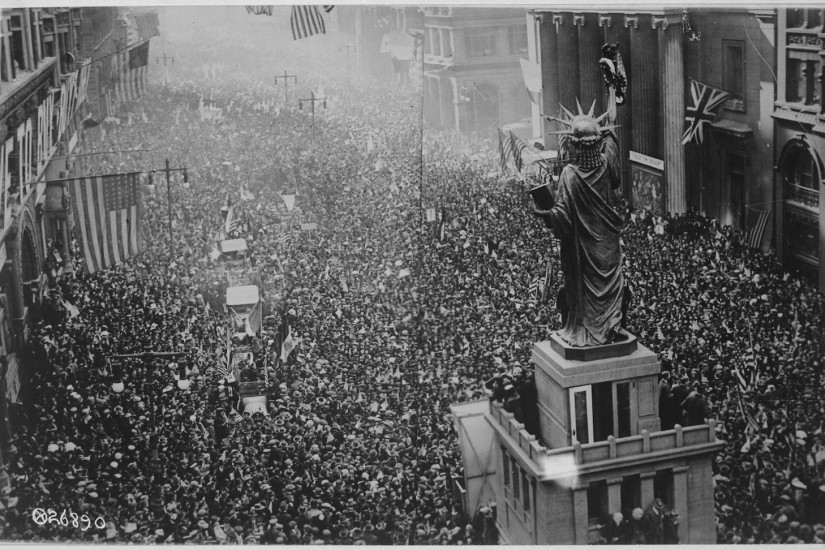 A celebration in Philadelphia during the announcement of the World War I Armistice, November 11, 1918.
Wikimedia Commons
…

If the new books scant the malign consequences of the Armistice, they also show little concern about the final spasm of madness that unfolded on the day it was signed. For the full story, one must turn to the late Joseph E. Persico’s well-crafted and quietly angry “Eleventh Month, Eleventh Day, Eleventh Hour: Armistice Day, 1918—World War I and Its Violent Climax,” from 2004. Because Foch rejected German requests for a ceasefire while the Armistice was being negotiated, Persico makes clear, sixty-seven hundred and fifty lives were lost and nearly fifteen thousand men were wounded. Worse yet, British, French, and American commanders made certain that the bloodshed continued at full pitch for six hours after the Armistice had been signed. The delegates in Foch’s railway carriage put their signatures to the document just after 5 A.M. on November 11th, and the key terms were immediately radioed and telephoned to Army commands up and down the front on both sides. Nonetheless, Allied soldiers scheduled to attack that morning did so until the very last minute.

Since the armies tabulated their casualty statistics by the day and not by the hour, we know only the total toll for November 11th: twenty-seven hundred and thirty-eight men from both sides were killed, and eighty-two hundred and six were left wounded or missing. But since it was still dark at 5 A.M., and attacks almost always took place in daylight, the vast majority of these casualties clearly happened after the Armistice had been signed, when commanders knew that the firing was to stop for good at 11 A.M. The day’s toll was greater than both sides would suffer in Normandy on D Day, 1944. And it was incurred to gain ground that Allied generals knew the Germans would be vacating days, or even hours, later.

In some cases, men wanted to fight, especially Americans, who hadn’t been worn down by four years of combat. Private Henry Gunther, of Baltimore, became the last American to be killed in the war, at 10:59 A.M., when he charged a German machine-gun crew with his bayonet fixed. In broken English, the Germans shouted at him to go back, the war was about to stop. When he didn’t, they shot him. Lieutenant General Robert Bullard, the commander of the U.S. Second Army, was openly disappointed to see the fighting end. On November 11th, he wrote about how he went “near the front line, to see the last of it, to hear the crack of the last guns in the greatest war of all ages. . . . I stayed until 11 A.M., when all being over, I returned to my headquarters, thoughtful and feeling lost.”