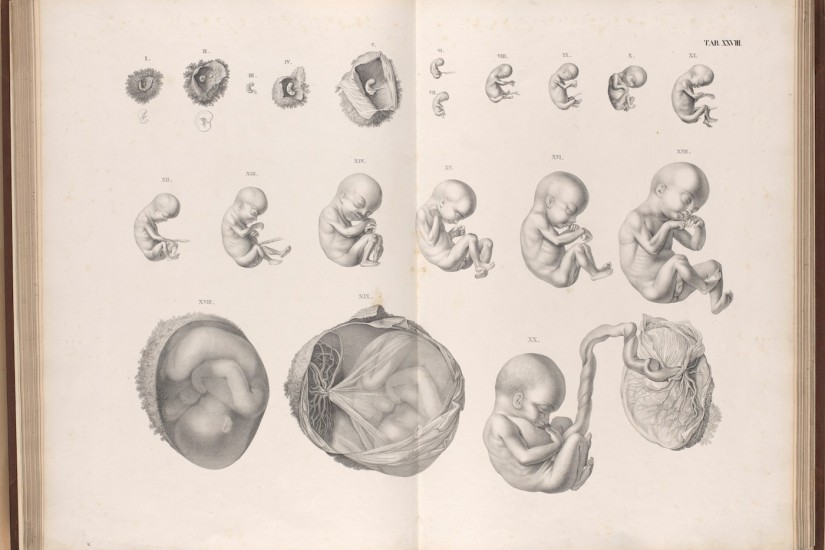 Developmental stages of a human embryo to a full-term fetus from an 1844 Geburtshulflicher Atlas.
Wellcome Collection
…

Reading Stolz’s cold medical description (“it gradually succumbed”) of what some now might describe as a baby dying, I had a hard time keeping my own judgment in check. But then as I found other physicians describing the cases they attended, and the material products they took away, I was able to move beyond my gut reactions and follow my own advice for my students. Why were doctors interested in these tiny “creatures” (as they often called them)? Why did women and families readily hand them over? What did this sharing of fetuses mean for science and medicine, and ultimately miscarriage in twenty-first-century America?

Numerous physicians removed miscarriage products (embryos, fetuses, placentas) from the homes of miscarrying women in the second half of the nineteenth century. Like Stolz, they frequently shared them with colleagues, sometimes with large audiences at medical society meetings or through the pages of medical journals. Miscarriage products ended up in doctors’ offices, medical school classrooms, and museums all across the country.

So customary was the practice of securing miscarried embryos and fetuses in American medicine that by the early 1900s when Franklin P. Mall, an eminent embryologist at Johns Hopkins University, decided to build a collection of human embryological specimens, he was able to gather thousands of “creatures” in only a few short years. Over 500 physicians helped Mall, passing along their treasures for what became the largest clearinghouse of embryological knowledge in the nation. Doctors’ common practice of acquiring miscarriage remains enabled the creation of a collection that was used to establish the modern stages of fetal development.

Physicians used miscarriage products to help answer a range of research questions. Some focused on what these tissues could reveal about the process of pregnancy and causes of miscarriage. But a surprising number of them utilized fetuses to explore larger questions about human biology, life, and death. Stolz’s fascination with his specimen came not only in gaining access to the internal workings of pregnancy, but also in the fact that the six-inch, infant-like fetus was still breathing at only five months gestation. Having such an intimate and graphic illustration of the workings of the human body was extremely rare but highly valued in nineteenth-century American medicine.

Doctors went to extremes to obtain products of miscarriages, sometimes deceiving their patients, pocketing embryos, and bringing even destroyed tissues to medical meetings. Anything and everything that came out of a woman’s vagina was important for understanding the science of human anatomy.