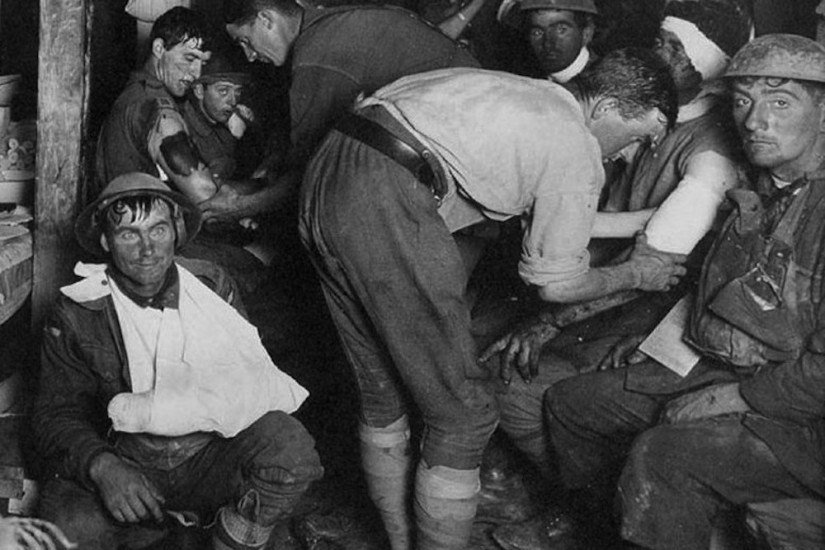 An image from the Great War taken in an Australian Advanced Dressing Station near Ypres in 1917.
Wikimedia Commons
…

The horror of the Great War consumed the lives of soldiers and civilians alike; it sought them out in their sleep, their imagination, and, bizarrely, in their entertainments. The “horror film” had existed almost from the time of the invention of the motion picture itself in the late 19th century. But a new kind of terror film manifested in the years following the Great War. The spook shows not only became more numerous; they took a ghastly turn, dealing more openly with the fate of the dead, even the bodies of the dead. Moreover, an unclassifiable kind of fiction began to appear, frequently called “weird” (as in the pulp magazine Weird Tales, 1923) because there seemed no better word for it. The public, and its practitioners, began calling it horror fiction. Art and literature pursued some of the same themes, even though at the time a strict division between “high” and “low” culture prevented many critics from seeing horror on canvas or in poetry, and still prevents a few today. British modernist Virginia Woolf wrote that certain feelings proved no longer possible after 1914; a sentiment might be expressed in words, she felt, but the body and mind could not experience the sensibilities “one used to have.”

By the same token, new feelings about death and the macabre began to seek expression. The root of these new cultural forms had a specific and terribly uncomfortable origin: the human corpse. Stirring up the primal, perhaps universal fear of the dead, the Great War had placed human beings in proximity to millions of corpses that could not be buried. Worse, many could not be identified, and more than a few did not even look like what we think human bodies should look like. Shells, machine guns, gas, and a whole array of technology had muddled them into misshapen forms, empty matter, if still disturbingly organic. The horror of the Great War, traumatically reenacted over and over and over after 1918 down to the present moment, drew its chill from the shattered, bloated, fragmented corpses that covered the wastelands made by the war.