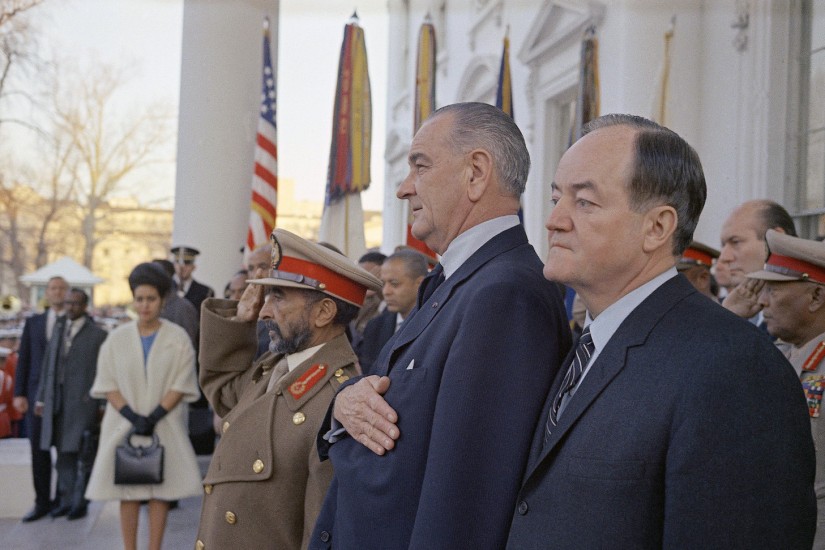 Lyndon Johnson and Hubert Humphrey at the White House during a state visit from Haile Selassie, emperor of Ethiopia, 1967.
Charles Tasnadi/Associated Press
…

In 1968, presidential politics was still a man’s world.

The modern women’s movement was in its infancy. Washington D.C. was the province of powerful white men.

As scholars such as Robert Dean and K.A. Cuordileone have shown, Cold War Democrats such as President John F. Kennedy held an ideal of manly, vigorous toughness that shaped their vision of honorable leadership during the Cold War. It also drew them into the military morass of Vietnam.

Liberals – with their nurturing, optimistic ethic – were vulnerable to accusations of weak manhood. In the 1950s, while carrying out his Red Scare witch hunts, Republican Sen. Joe McCarthy purged homosexuals from federal agencies, linking sexuality with subversion. Liberals were “soft” by association.

But Kennedy’s successor as president, Lyndon Johnson of Texas, was a big, macho man who applied his earthy masculinity to progressive ends. The notorious “Johnson Treatment” combined cajoling, vulgar analogies, veiled threats and physical force. He used it in the service of passing “Great Society” legislation that included the Civil Rights Act and Voting Rights Act, Medicare and Medicaid, and dozens of other initiatives.

Johnson famously reflected to biographer Doris Kearns Goodwin that the Great Society was “the woman I really loved” and Vietnam was “that bitch of a war.” The military struggle, in his mind, demanded strong male traits such as toughness and sacrifice. He worried that if Vietnam fell to communism, then he would get labeled “a coward. An unmanly man. A man without a spine.”

He considered Humphrey, his vice president, one of those weak men.

Humphrey did cry a lot. He cried during speeches when he got too wound up. He cried after JFK crushed him in the 1960 West Virginia primary, burying his presidential bid. He cried at the sight of wounded American soldiers in Vietnam hospitals.

Humphrey was authentically emotional and empathetic. As a senator from Minnesota, he established a reputation as an energetic, sincere and pragmatic spokesman for liberal values. In early 1965, prior to the massive military escalation in Vietnam, Humphrey privately advocated a peace settlement.

But Johnson demanded Humphrey’s loyalty, and Humphrey succumbed to Johnson’s domination. To appease the president, Humphrey sold the war to Congress and the public with trademark fervor. By 1968, Humphrey had curried favor with the Democratic establishment, but destroyed his progressive reputation.