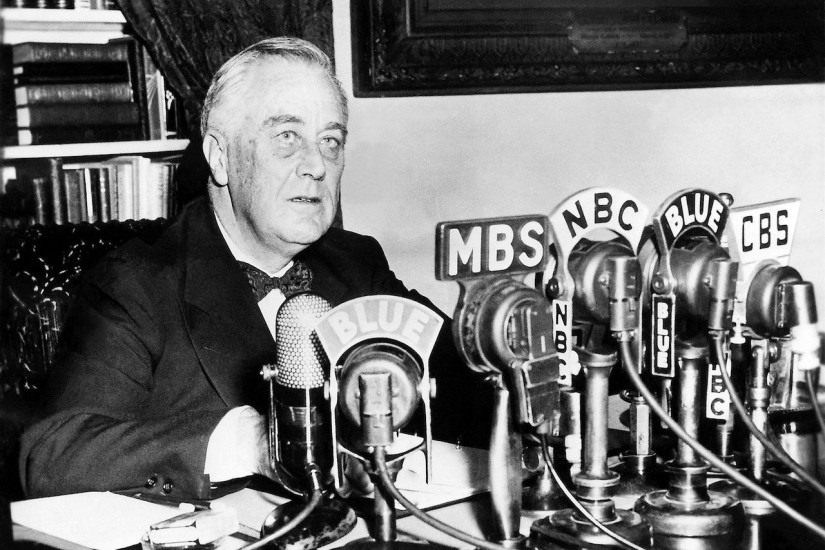 President Franklin D. Roosevelt delivers a State of the Union address announcing plans for the Second Bill of Rights regarding social and economic guarantees, January 11, 1944.
National Archives and Records Administration

Be advised: “Democrats are in danger of going too far left in 2018.” So warn Republicans like Mitt Romney and ex-Democrats like Joe Lieberman and public personae as diverse as James Comey and Howard Schultz. In recent months, the pundit class has determined that the party’s leftward lurch heralds the rise of a “liberal tea party”—a movement that could very well unmoor Democrats from their longstanding center-left traditions, in close imitation of the spiral of events that caused the Republican Party to turn sharply to the right in recent years.

What’s fueling this argument? For one, more Democrats have rallied, either noisily or cautiously, around such policy innovations as “Medicare for all,” universal college and a universal basic income. That a smattering of Democratic candidates have elected to call themselves “democratic socialists” has only fueled the claim that such programs are “socialist.” “The center is Harry Truman and Daniel Patrick Moynihan, not Eugene Debs and Michael Harrington,” warned New York Times opinion columnist Bret Stephens recently. (Debs and Harrington were self-identified socialists.)

But there’s something wrong with this historical interpretation: Truman strongly supported single-payer health care. Moynihan supported a universal basic income in the 1960s. Dating back to World War II, Democrats sought to make a government-paid education available to as many Americans as possible. If Democrats are marching to the left, that road leads directly back to platforms and politicians who, in their day, commanded wide support and existed firmly in the mainstream of political thought.

What’s more, to label these programs “socialist”—which is to say, far outside the center of the political spectrum—reveals a constrained worldview. For over six decades, center-right parties in Europe—in Britain and France, Germany and Austria, and almost everywhere between—have either participated in or acceded to the very same policies.

In a remarkable way, today’s debate today strongly resembles a broader discussion that occurred in the United States and Europe in the 1940s, amid wartime mobilization and economic reconstruction, and in the decades following.

It’s perfectly reasonable to dispute the progressive agenda on its merits. There are strong policy arguments running in both directions. But to argue that it breaks with the party’s roots, or that it falls dangerously outside the mainstream, is ahistorical.

***
What pundits today decry as a radical turn in Democratic policy and politics actually finds its antecedents in 1944.