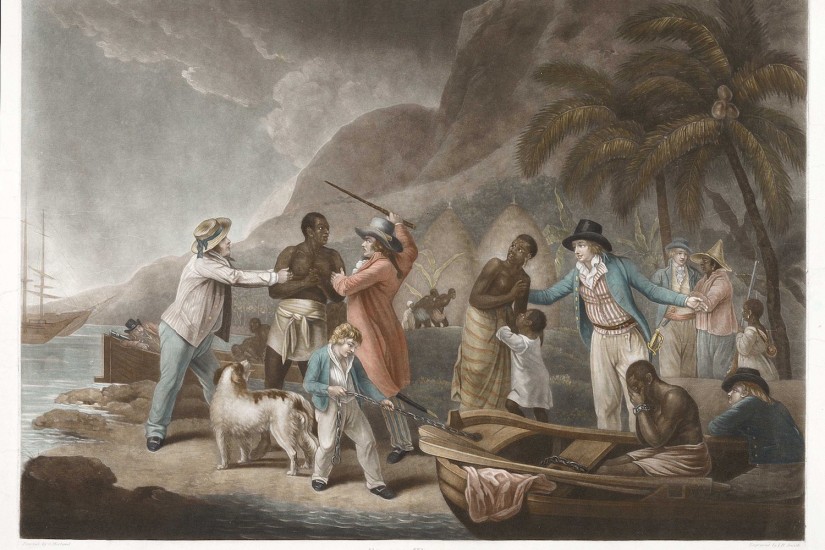 An 1814 oil painting depicting the Atlantic slave trade, based on a 1788 original exhibited at the Royal Academy in London.
Wikimedia Commons

Bunce Island, just off the Sierra Leone coast in west Africa, stands as a symbol of Scotland’s forgotten role in the Atlantic slave trade. Few people in Scotland know of the island, but no-one in Sierra Leone is unaware of it. It looms in the national consciousness. In the 18th and 19th century, tens of thousands of Africans – ancestors to the men and women who now live in the capital of Freetown – were held captive there in appalling conditions by Scottish slavers, before being shipped across the sea to plantations in the Caribbean and the Americas.

Bunce Island was turned into a little oasis of all things Scottish by slavers. It had its own castle. It was leased from the local king who once a year would turn up to collect his commission dressed in a kilt. Isatu Smith, the head of museums and relics in Sierra Leone, describes how the Scottish slavers even built their own golf course on the island and dressed their slave caddies in tartan so they could be reminded of home. "They were serving Scottish masters, so they had to look the part," Smith says. "We have a shared history. It is very important that the Scottish people know about this – whether they accept it or not is another question."

This week, Scotland will finally learn of the horrors of Bunce Island and be confronted by its forgotten role in the slave trade. David Hayman, the Scottish actor and director, has produced a new two-part documentary which begins on Tuesday night. In it, Hayman, through interviews with experts like Smith, lays bare just how central a role Scotland played in the slave trade.

The country was "up to its armpits in slavery", Hayman says, even though the nation has always presented itself not just as having little to do with the trade in human lives, but also a country which was a leading light when it came to abolition. It is a false history and one that Hayman is hell bent on correcting.

Scottish slavers ran Bunce Island from 1728 to 1807. They imported ice from Europe to keep food and wine cool in larders and enjoyed strolls in a private garden just metres away from pens where hundreds of human beings were kept like cattle before making the deadly Atlantic crossing. An estimated 50 per cent of slaves died on the journey.

…
View on The Herald
View Connections